There is little doubt that easy access to federally subsidized student loans has contributed to the astronomical increase in the cost of attending college in the United States.  After all, what 18 year old would turn down $200,000 in free money to party for 4 years?  As an added bonus, when you figure out upon graduation that your degree in anthropology if fairly worthless, you can always just move back in with mom and force taxpayers to pick up your debt burden.  Anything less would be a substantial “triggering” event and we just can’t have that.

As we noted roughly a year ago, the amount of student debt outstanding is on track to reach nearly $17 trillion by 2030…which is clearly enough artificial demand to send the price of almost any commodity product soaring. 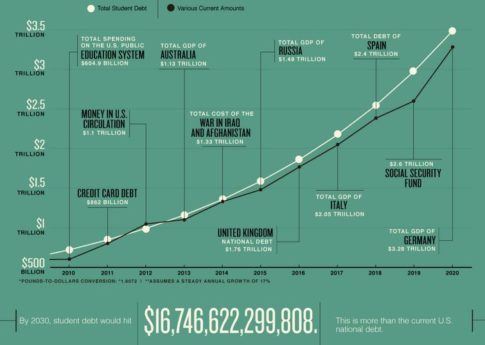 Well, apparently New York’s Governor doesn’t think that misinformed government policies are doing nearly enough to drive up college tuition costs.  As a result, he has decided to jump on the Bernie Sanders bandwagon with a new proposal that would provide free tuition at public state and city colleges to any student whose parents earn less than $125,000.

As the New York Times notes, Cuomo’s plan could apply to as many as 1 million New York families though it was not “immediately clear how the program would be paid for”…which is just a minor detail anyway.

Mr. Cuomo hopes for a quick start for his idea, with a three-year rollout beginning in the fall, though it will require legislative approval, a potential snag when the governor and lawmakers on both sides of the aisle have been at odds over a pay raise and other issues.

It was not immediately clear how the program would be paid for, though the administration said the state already provided nearly $1 billion in support through its tuition assistance program; those awards are capped at $5,165, and many of the grants are smaller.

If the plan is approved, the Cuomo administration estimates the program would allow nearly a million New York families with college-age children, or independent adults, to qualify.

Oh well, we guess this is just a simplification in the process…why go through the bother of underwriting student loans just to have taxpayers pick up the bill later anyway?  With the governor’s plan, you just go straight to taxpayers for a handout upon enrollment.  Moreover, taxpayers save on the interest costs associated the defaulted student loans so this is really a win for everyone.