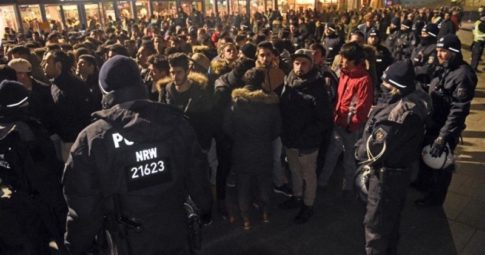 German police are being criticized for preventing a repeat of last year’s shocking scenes in Cologne where hundreds of women were sexually molested by Muslim migrants on New Year’s Eve.

A huge mob of around 650 North African men turned up at the same location of last year’s mass sex assault, despite a massive police presence of around 1700 officers who were tasked with ensuring the safety of citizens.

According to reports, authorities assumed that the majority of the men were the same ones involved in the mass molestation of women the previous year. Police also said that the characteristics being displayed by the “comparably aggressive” men were “such that potential crimes could indeed be expected”.

190 were told to leave the area, 92 were taken into custody and 27 were placed under arrest.

However, leftists are now criticizing the police for “racially profiling” the mob of men, with Police Chief Juergen Mathies forced to respond: “I reject this negative criticism. The clear aim was to prevent similar events to previous year.”

“It raises the question of proportionality and legality when around 1,000 people were checked and partially detained based on their appearance alone,” said Green party co-chair Simone Peter.

Former politician Christopher Lauer called the move “sweeping prejudice against an entire group of people based on their appearance.”

However, German citizens praised police, telling DW that they, “seemed cautiously pleased with the outcome” and “felt safe”.

It appears as though leftists would rather maintain the facade of political correctness than actually prevent the mass molestation and rape of women.

Also consider the fact that hundreds of migrants gathered in Cologne despite the massive backlash and awareness of what happened last year. They apparently thought they could get away with raping and molesting hundreds of women yet again.

14 sexual assaults were reported in Hamburg, with the perpetrators identified as Syrians, Iraqis, Afghans, an Eritrean and a German-Russian. 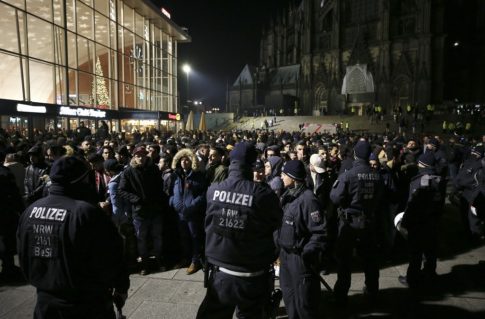 Hailed a success by its organisers for reducing the number of violent crimes committed on New Year’s Eve from over 1,000 last year to less than a dozen, Cologne police are now being criticised for using “racial” methods.

Left-wing activists, including members of the local Green party, have criticised the police for focusing their security efforts too clearly at the same groups which were identified as the main perpetrators of the 2016 attacks. The comments came after Cologne police controlled thousands of so-called ‘Nafris’ — North Africans — as they attempted to enter the city centre ring of steel.

Germany’s Deutsche Welle reports the remarks of Green party chairman Simone Peter who noted that while the measures had worked, he doubted the legality of the police’s actions. He said: “It raises the question of proportionality and legality when around 1,000 people were checked and partially detained based on their appearance alone.”

Meanwhile left-wing politician Christopher Lauer, active at times with the Social Democrats and Pirate Protest Party, said of the terms used by Cologne police that it was “sweeping prejudice against an entire group of people based on their appearance”.

“I regard this term as highly dehumanizing.”

Despite the ill feeling over the approach, Cologne’s local Express newspaper reports the arrest of a 38-year-old Syrian on New Year’s Eve as police believed “urgent” action was necessary following intelligence he was planning a terror attack that evening. The migrant had previously been arrested for terror-financing offences.

Cologne police gave regular updates through the night and local newspapers carried updates from the force reporting the number of Nafris who had been stopped, searched, and turned away. Upon arriving, hundreds of potential migrant troublemakers and even individuals known to have been involved in the 2016 attacks were immediately turned around and escorted to trains out of the centre.

In all, 1,200 Nafris were controlled by Cologne police. In addition, the force recorded two sexual assaults, six thefts, and 29 individuals were arrested. One train coming into the city which police learnt had 300 North Africans on-board was stopped and turned back just before it reached the centre.

This contrasts with the 2016 celebrations when over 500 women were recorded as victims of sexual assault and 28 were raped. Including other crimes such as thefts and assaults, there were some 1,300 victims.

Cologne’s police chief was forced to retire early after the policing failure, which saw less than 100 officers on patrol for the whole city. Now defending the force from having policed the event too thoroughly instead, chief Jürgen Mathies said that while they had deliberately targeted Nafris for searches and identity checks, of the hundreds met in this way “there was a clear threat of criminal activity present”.

He said “We had groups of people who were comparably aggressive” to those that police encountered last year.

The police chief also emphasised the fact that police hadn’t only performed security checks on North Africans, but had investigated other groups as well. The city’s mayor called the measures “necessary”.

The force also defended the ‘Nafri’ term, which was admitted to be an internal policing term. An internal document describing Nafris revealed in the German press briefs police officers that they come from Egypt, Algeria, Lebanon, Libya, Morocco, Syria, Tunisia, are generally between 15 and 25-years-old, and are violent.