Now, we know what you’re thinking…California’s liberal lawmakers in Sacramento are certainly well left of center and maybe a bit kooky but they would never do something quite that ridiculous.  Well, we had the same thought so we decided to track down the actual text of the legislation, Senate Bill No. 1322, and, unfortunately, they did do something that ridiculous.

Below is the first page of SB1322 which notes that while “existing law makes it a crime to solicit or engage in any act of prostitution” SB1322 “would make the above provisions inapplicable to a child under 18 years of age.” 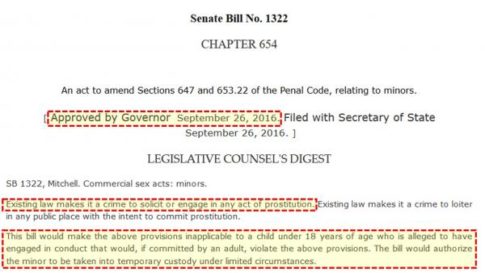 Of course, as the LA Times pointed out, the bill, which was authored by Los Angeles Democrat Holly Mitchell, is founded on the premise that keeping young children out of the juvenile justice system and instead placing them in the hands of Social Services would be better for their ultimate rehabilitation.

Gov. Jerry Brown in 2014 signed legislation placing sex trafficking victims without legal guardians under the authority of the dependency system, which centers on caring for abused and neglected children.

SB 1322 drew the support of a large coalition of advocates who said the bill was a step further in that direction, taking young victims entirely out of the juvenile justice system. But law enforcement officials oppose the move, saying the state’s child welfare system is woefully low on resources.

And while Mitchell’s efforts may be well intentioned, it simply proves once again how completely ignorant our elected officials are to the unintended consequences resulting from the practical application of their ridiculous laws.  Certainly anyone with just a modest IQ and a touch of business sense, should be able to quickly deduce that SB 1322 provides a huge incentive for pimps and human traffickers to target underage girls rather than adults.  As Travis Allen, a rare California Republican serving in Sacramento, noted in an op-ed published by the Washington Examiner, “immunity from arrest means law enforcement can’t interfere with minors engaging in prostitution — which translates into bigger and better cash flow for the pimps.”

Unfortunately, the reality is that the legalization of underage prostitution suffers from the fatal defect endemic to progressive-left policymaking: it ignores experience, common sense and most of all human nature — especially its darker side.

The unintended but predictable consequence of how the real villains — pimps and other traffickers in human misery — will respond to this new law isn’t difficult to foresee. Pimping and pandering will still be against the law whether it involves running adult women or young girls. But legalizing child prostitution will only incentivize the increased exploitation of underage girls. Immunity from arrest means law enforcement can’t interfere with minors engaging in prostitution — which translates into bigger and better cash flow for the pimps. Simply put, more time on the street and less time in jail means more money for pimps, and more victims for them to exploit.

As Alameda County District Attorney Nancy O’Malley, a national leader on human trafficking issues, told the media, “It just opens up the door for traffickers to use these kids to commit crimes and exploit them even worse.” Another prosecutor insightfully observed that if traffickers wrote legislation to protect themselves, it would read like SB 1322.

So, congratulations on the new legislation, Ms. Mitchell.  Just like your $15 minimum wage will simply result in a whole bunch of low-income folks getting fired over the coming years, we suspect you just doomed a lot more vulnerable teenage girls to the sex trade.

Senate Bill 1322 can be read in its entirety below: