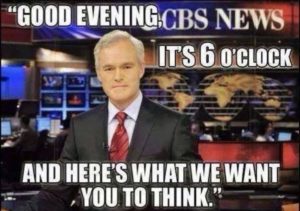 – Mainstream Media is Now Whining About the “Fake News” Hysteria It Created:

After coming under attack, the alternative media successfully appropriated and reassigned the now ubiquitous term “fake news” to a variety of disingenuous mainstream media outlets. The corporate media is not too happy about this, and is doing what it does best (aside from cheerleading for war). It’s whining about it to its readers.

Nothing more perfectly highlights the mainstream media’s instinctual response to complain than an article published on Christmas Day in The New York Times, which reinvents history by claiming alternative media is to blame for turning “fake news” into an overly expansive and thus meaningless term. Here are a few excerpts:

WASHINGTON — The C.I.A., the F.B.I. and the White House may all agree that Russia was behind the hacking that interfered with the election. But that was of no import to the website Breitbart News, which dismissed reports on the intelligence assessment as “left-wing fake news.”

Rush Limbaugh has diagnosed a more fundamental problem. “The fake news is the everyday news” in the mainstream media, he said on his radio show recently. “They just make it up.”

Some supporters of President-elect Donald J. Trump have also taken up the call. As reporters were walking out of a Trump rally this month in Orlando, Fla., a man heckled them with shouts of “Fake news!”

Until now, that term had been widely understood to refer to fabricated news accounts that are meant to spread virally online. But conservative cable and radio personalities, top Republicans and even Mr. Trump himself, incredulous about suggestions that fake stories may have helped swing the election, have appropriated the term and turned it against any news they see as hostile to their agenda.

The line highlighted above is a complete fabrication, and is either the result of extreme ignorance or intentional deceit. Either way, The New York Times should be ashamed of itself.

“Fake news was a term specifically about people who purposely fabricated stories for clicks and revenue,” said David Mikkelson, the founder of Snopes, the myth-busting website. “Now it includes bad reporting, slanted journalism and outright propaganda. And I think we’re doing a disservice to lump all those things together.”

As someone who followed the fluid and rapid progression of the “fake news” meme very closely, I can tell you that it didn’t happen the way The New York Times claims. First, let’s discuss what the term “fake news” should mean. I think the Snopes definition above is fine: “people who purposely fabricated stories for clicks and revenue.” If mainstream media had held to this standard following the election, there wouldn’t have been a problem. Nobody in alternative media would’ve cared, but that’s not what happened.

Rather, ensconced in an election-loss driven hysteria, various mainstream media outlets intentionally starting blurring the definition of fake news in order to slander the competition. This really got started with the promotion of a ridiculous list of websites to avoid compiled by a loony professor at Merrimack college. I covered the story barely a week after the election in the post, Zerohedge Included in What NY Magazine Calls ‘Extremely Helpful List of Fake and Misleading News Sites.’ Here’s some of what I observed.

Who cares that some assistant professor made a list of sites she doesn’t like and warns people about them? Why should we pay attention?

We should care because it is being promoted heavily by the mainstream media. For example, look at how a writer at New York Magazine promoted the list (seems kinda “clickbait-y” doesn’t it): 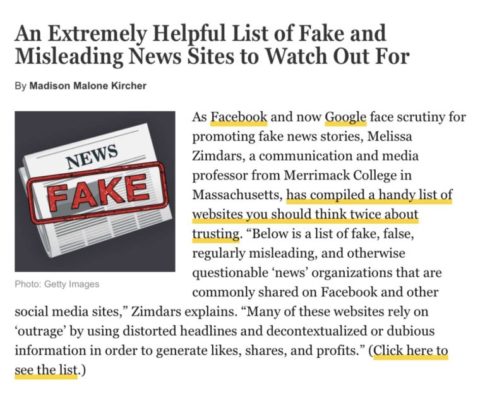 That article ended up being the most popular piece published on New York Magazine’s website that day. I never would’ve highlighted the professor’s ridiculous list if mainstream media wasn’t promoting it, and NY Mag wasn’t the only one. As I also noted:

The Los Angeles Times today published an article titled, Want to Keep Fake News Out of Your Newsfeed? College Professor Creates List of Sites to Avoid, in which it noted:

During the election, many people fell prey to fake news stories on social media — even the president-elect ended up retweeting fake statistics. A professor of communication has created a list of unreliable news sites to help people do better.

Melissa Zimdars, an assistant professor of communication at Merrimack College in Massachusetts, put together a publicly available Google doc cataloging “False, misleading, clickbait-y and satirical ‘news’ sources.” It’s been making the rounds on social media as people seek to cleanse their newsfeeds of misinformation.

In its headline, the Los Angeles Times explicitly promotes this list as a helpful tool to avoid “fake news.” Alternative media, Trump supporters and conservatives didn’t bastardized the term, mainstream media did.

Of course, that was just the beginning. What really enraged everyone, including myself, was when The Washington Post dropped all journalistic standards to promote a “fake news” list created by the unknown, anonymous and obviously clownish organization PropOrNot. You all know what happened next, but if you want to revisit my thoughts on the topic, see:

Additional Thoughts on “Fake News,” The Washington Post, and the Absence of Real Journalism

After all that, alternative media rightly appropriated the term, and accusations of “fake news” are now more often directed at billionaire-owned mainstream media than independent media. The response? Corporate media is crying foul and reinventing history by claiming that it was alt media barbarians who twisted the term “fake news” for propaganda purposes, when the exact opposite happened. Monumentally pathetic.

To conclude, I’d like to remind everyone of the following:

And The Washington Post likes to lecture us about fake news.#bitcoin pic.twitter.com/mKR9RtUpnd