– How Americans Spent Their Money in the Last 75 Years — in One Simple Chart:

(HM) Consumer spending makes up 70% of the United States economy. We all have bills to pay and mouths to feed, but what do Americans actually spend on? Here is a breakdown of how Americans spent their money in the last 75 years (click to enlarge). 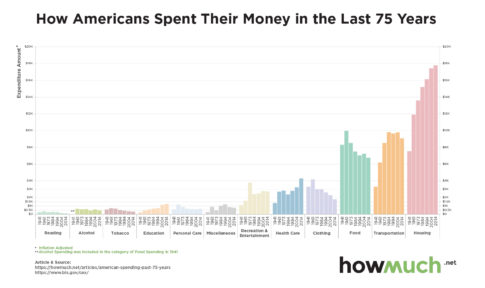 In the chart above, spending is broken into 12 categories: Reading, alcohol, tobacco, education, personal care, miscellaneous, recreation & entertainment, healthcare, clothing, food, transportation and housing. Each category is further broken down into spending by year, from 1941 to 2014, and each category is given a unique color. The data was collected from the Bureau of Labor Statistics. The data is adjusted for inflation and measures median spending of all Americans.

At the same time, Americans began spending more on education, transportation and healthcare. Spending on education has increased far more than any other category, jumping from $242 in 1941 to $1,236 in 2014. Education spending increased at a particularly fast rate between 1984 and 1994 and onward. While spending on healthcare increased between 1941 and 2014, overall spending dipped between 1973 and 1984, but then began rising rapidly thereafter.

Between 1941 and 2014 Americans spent money on most of the same things, with a few changes. Housing has persisted as a large area of spending for Americans, as has the food category. However, spending on food and clothing has fallen when adjusting for inflation while spending on education and healthcare has risen quickly.