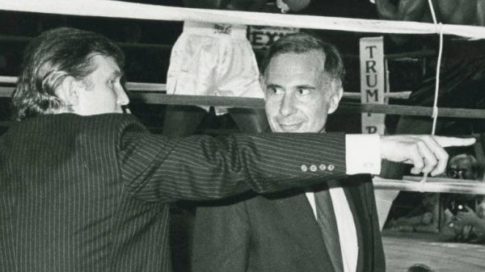 Well this was a “no brainer.”The Wall Street Journal reports that billionaire investor Carl Icahn is expected to be named special adviser to the president on overhauling federal regulations, according to people familiar with the matter.

Mr. Icahn, who has spent the past four decades battling big companies as an activist investor, already has been wielding influence in President-elect Donald Trump’s transition team.

He is playing a central role in selecting the next chairman of the Securities and Exchange Commission, the people said. Interested candidates have reached out to him, and he is interviewing others at the request of Mr. Trump, the people said.

The 80-year-old has played a similar role in identifying Mr. Trump’s choices for other important posts. Mr. Icahn, who controls an oil refiner and has spent months berating the Environmental Protection Agency over a rule he says hurts the industry, helped Mr. Trump vet candidates to run the EPA.

He weighed in enthusiastically as Mr. Trump considered whether to nominate Steven Mnuchin and Wilbur Ross to run the Treasury and Commerce departments, respectively. Both men were picked for the jobs.

In Trump’s statement on Icahn’s appointment, the president elect suggests Icahn may be capable of magic, stating he is “innately able to predict the future especially having to do with finances and economies.” 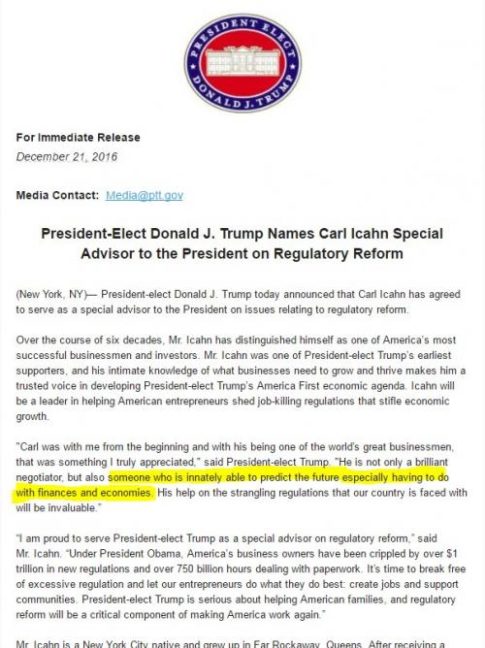 The position isn’t an official government job; Mr. Icahn won’t get paid and won’t have to give up his current business dealings. Yet, as WSJ reports, it is the latest example of a quintessential outsider assuming power as President-elect Donald Trump assembles his cabinet secretaries and advisers.

Messrs. Trump and Icahn say U.S. businesses have been overregulated in the Obama administration, which they argue is causing them to hold back on investments and is slowing the economy. Mr. Icahn will now be a key player in Mr. Trump’s efforts to loosen the regulatory reins.

“I’m involved with Donald where he wants me to be—I believe he respects my views and I think he listens to me,” Mr. Icahn said in an interview with The Wall Street Journal. “What Trump is trying to achieve is to show business in a lot of this country they aren’t going to be ruined by absurd regulation by bureaucrats.”