Update: according to US officials cited by Reuters, the unmanned vehicles was seized unlawfully by China.  A Reuters official also adds that “the UUV was lawfully conducting a military survey in the waters of the South China Sea,” the official said. “It’s a sovereign immune vessel, clearly marked in English not to be removed from the water – that it was U.S. property.”

The incident, the first of its kind in recent memory, took place on Dec. 15 northwest of Subic Bay off the Philippines just as the USNS Bowditch, an oceanographic survey ship, was about to retrieve the unmanned, underwater vehicle (UUV), the official told Reuters.

The Pentagon later confirmed the incident at a news briefing. It said the drone used commercially available technology and sold for about $150,000.

The seizure by the Chinese Navy will add to concerns about China’s growing military presence and aggressive posture in the disputed South China Sea, including its militarization of maritime outposts. A U.S. think tank this week said new satellite imagery indicated China has installed weapons, including anti-aircraft and anti-missile systems, on all seven artificial islands it has built in the South China Sea.

Mira Rapp-Hooper, a senior fellow in the Asia-Pacific Security Program at the Center for a New American Security, said China would have a hard time explaining its actions. “This move, if accurately reported, is highly escalatory, and it is hard to see how Beijing will justify it legally,” Rapp-Hooper said.

The escalating, so far mostly verbal conflict with China may have just heated up following a Reuters reports that China has seized an unmanned, underwater US navy vehicle inside off international waters in the South China Sea, and that the US has issued a formal statement demanding the return of the vehicle.

According to CNN, which has a slightly different take on events, a US oceanographic vessel Thursday had its underwater drone stolen by a Chinese warship literally right in front of the eyes of the American crew. 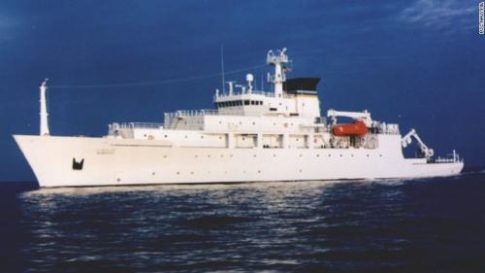 In the latest encounter in international waters in the South China Sea region, the USNS Bowditch was sailing about 100 miles off the port at Subic Bay when the incident occurred, according to the official.

The Bowditch (T-AGS 62) is a Pathfinder class oceanographic survey ship, a third ship in the class. The USNS Bowditch is a part of a 29 ship Special Mission Ship program and operates in the South China Sea. She is named after Nathaniel Bowditch. Bowditch was engaged in surveying at Tacloban shortly after typhoon Haiyan in advance of the Navy’s Operation Damayan in an area known for its shifting hazards to navigation using its multi-beam contour mapping system.

Bowditch had stopped in the water to pick up two underwater drones. At that point a Chinese naval ship that had been shadowing the Bowditch put a small boat into the water. That small boat came up alongside and the Chinese crew took one of the drones.

The US got no answer from the Chinese on the radio when it said the drone was American property, the official said cited by CNN. More details:

As they turned away, the Chinese did come up on the radio and indicated they were returning to their own operations.

US oceanographic research vessels are often followed in the water under the assumption they are spying. In this case, however, the drone was simply measuring ocean conditions, the official said.
The Pentagon has not officially commented on the incident.

Although it’s unclear what the motivation was for the Chinese, the seizing of the drone comes on the heels of other provocative incidents that have happened since President-elect Donald Trump received a congratulatory call with Taiwan’s President, a violation of the US’s agreement with China’s “One China policy”. China publicly voiced their disapproval of that incident and contacted the White House at the time.

This “seizure” takes place one day after China’s influential state-run tabloid, the Global Times, called for a plan to take Taiwan by force and make swift preparations for a military incursion. The article urged China to rebalance its stance towards Taiwan to “make the use of force as a main option” and carefully prepare for possible moves toward independence.

It also follows a series of warnings to the Trump administration by Chinese diplomats, in which they cautioned that China will not allow the “One China” policy to be used as a bargaining chip, something Trump hinted he was willing to do in a Fox News interview last Sunday.