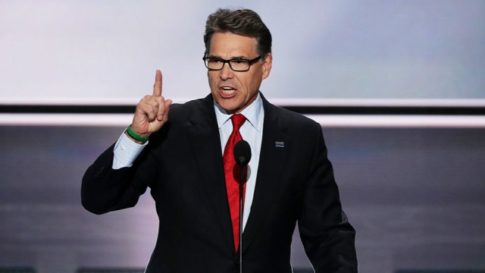 While hardly a surprise by now, having been leaked initially over the weekend, moments ago President-elect Donald Trump formally confirmed his plans to nominate former Texas Gov. Rick Perry as Energy secretary.

In a statement distributed by his transition team, Trump said that “As the Governor of Texas, Rick Perry created a business climate that produced millions of new jobs and lower energy prices in his state, and he will bring that same approach to our entire country as Secretary of Energy. My administration is going to make sure we take advantage of our huge natural resource deposits to make America energy independent and create vast new wealth for our nation, and Rick Perry is going to do an amazing job as the leader of that process.”

As we pointed out previously, Perry infamously forgot the name of the department he will lead if confirmed during a 2011 Republican presidential primary debate. When trying to list three federal departments he would eliminate, Perry named the departments of Education and Commerce, but then stumbled, saying, “The third one, I can’t. Sorry. Oops.”

It’s the one he will be in charge of under the Trump administration .

Perry stepped down as Texas’s longest-serving governor in 2015 and then ran again unsuccessfully for president. He was later a contestant on “Dancing with the Stars.” surface early Tuesday.

“As the former governor of the nation’s largest energy producing state, I know American energy is critical to our economy and our security,” Perry said in a statement. “I look forward to engaging in a conversation about the development, stewardship and regulation of our energy resources, safeguarding our nuclear arsenal, and promoting an American energy policy that creates jobs and puts America first.”