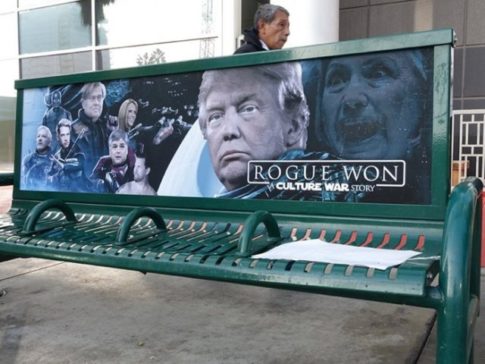 Several pro-Trump Star Wars parody posters have been spotted around Hollywood, appearing on bus stops and benches near the Pantages Theater where the premiere for Rogue One: A Star Wars Story took place this weekend.

The posters, which were reportedly designed and placed around Hollywood by notorious conservative street artist Sabo, appear to also be a reference to the controversy surrounding Rogue One writers Chris Weitz and Gary Whitta, who seemingly attacked Trump and his supporters while comparing them to white supremacists shortly after the election.

“Please note that the Empire is a white supremacist (human) organization” posted Weitz in a since-deleted tweet shortly after the election.

Whitta responded to the tweet, pointing out that “the white supremacist” empire were also “Opposed by a multi-cultural group led by brave women”– a reference to Hillary Clinton.

Weitz also posted a picture of a safety pin, along with the comment “Star Wars against hate. Spread it.”

The comments prompted a mass boycott from Trump supporters, with the “#DumpStarWars” hashtag also trending on Twitter last week.

Due to the location and timing of the posters, The Hollywood Reporter notes that celebrity guests at the premiere would have been “greeted by artwork meant to rub it in the faces of liberal Hollywood that Donald Trump beat Hillary Clinton in the Nov. 8 presidential election”.

Another poster was also spotted featuring Donald Trump on the front of a “Why Him?” poster next to Bryan Cranston and Hillary Clinton.

“WHY HIM?” by SABO pic.twitter.com/oxBa3PYMC0

“It does my heart well to know Hollywood went all out producing all kinds of girl-power movies in anticipation of the first woman president only to have their parade totally rained on by a white-skinned, blue-eyed, all-America loving, pussy-grabbing blowhard of a man’s man.” said Sabo in an interview with the Hollywood Reporter.

According to the Hollywood Reporter, Sabo “has previously attacked Leonardo DiCaprio, Nate Parker, Lena Dunham, Cher and other celebrities in his artwork.”

“His typical method of operation is to plaster his creations all over a designated area before the sun rises” they explained. “And the posters usually remain for several hours before authorities — or offended liberals — remove them.”