Geert Wilders is NOT what he wants himself appearing to be.

Additionally, I’ve said before that the founder of the Gatestone Institute is a philanthropist and a Zionist.

It is TPTB who engineered the migrant crisis (and brought all these ‘prime-time soldiers’ into Europe) and their agenda is beyond sinister, which is one reason why I often post all those reports (also from the Gatestone Institute) about all these crimes committed by migrants.

All of this is, as always, about … divide et impera! … but much, much worse.

So this is just FYI.

From Paradise to Bolshevik Thought Police

A country whose most outspoken filmmaker was slaughtered by an Islamist; whose bravest refugee, hunted by a fatwa, fled to the U.S.; whose cartoonists must live under protection, had better think twice before condemning a Member of Parliament, whose comments about Islam have forced him to live under 24-hour protection for more than a decade, for “hate speech.” Poor Erasmus! The Netherlands is no longer a safe haven for free thinkers. It is the Nightmare for Free Speech.

Paul Cliteur, Professor of Jurisprudence at Leiden University, who was called as an expert witness, summed up the message coming from the court: “It would have been better if the Dutch state had sent a clear signal [to terrorists] via a Dutch court that we foster a broad notion of the freedom of expression in the Netherlands.”

Here are just a few details to help understand what Wilders experiences every day because of his ideas: No visitors are allowed into his office except after a long wait to be checked. The Dutch airline KLM refused to board him on a flight to Moscow for reasons of “security.” His entourage is largely anonymous. When a warning level rises, he does not know where he will spend the night. For months, he was able to see his wife only twice a week, in a secure apartment, and then only when the police allowed it. The Parliament had to place him in the less visible part of the building, in order better to protect him. He often wears a bulletproof vest to speak in public. When he goes to a restaurant, his security detail must first check the place out.

Wilders’s life is a nightmare. “I am in jail,” he has said; “they are walking around free.”

The historic dimension of Wilders’s conviction is related not only to the terrible injustice done to this MP, but that it was the Netherlands that, for the first time in Europe, criminalized dissenting opinions about Islam.

The Netherlands is a very small country; whatever happens to this enclave is seen in the rest of Europe. The Netherlands refused to surrender to the Spanish invasion. It was from Rotterdam, the second-largest Dutch city, that the Founding Fathers left to create the United States of America. It was to the Netherlands that some of the most brave, original European philosophers and writers — Descartes, Rousseau, Locke, Sade, Molière, Hugo, Swift and Spinoza — had to flee to publish their books. It is also the only corner of Europe where there were no pogroms against Jews, and where Rembrandt painted Jesus with the physical traits of Jews.

Take Leiden: “Praesidium Libertatis” (“Bastion of Freedom”) is the motto of the Netherlands’ most ancient university. Leiden was the university of Johan Huizinga, the great historian who opposed the Nazis and died in a concentration camp. Leiden was also the university of Anton Pannekoek, the mentor of Martinus Van der Lubbe, the Dutch hero who torched the Nazi Parliament in 1933.

In Leiden today, you meet brave intellectuals such as Afshin Ellian, an Iranian jurist who fled Khomeini’s Revolution in Iran and who also now lives under police protection for his observations on Islam. Ellian’s office is close to the former office of Rudolph Cleveringa. When the Nazis invaded the Netherlands and called on Dutch public officials to fill out a form in which they had to declare whether they were “Aryans” or “Jews”, everyone but Cleveringa capitulated. He understood the consequences of such commands.

Twelve years ago, the Netherlands was again plunged into fear for the first time since World War II. In Linnaeusstraat, a district of Amsterdam, Mohammed Bouyeri, a Muslim extremist, ambushed the filmmaker Theo van Gogh and slaughtered him, then pinned on his chest a letter threatening the lives of Geert Wilders and Ayaan Hirsi Ali. Before that murder, Pim Fortuyn, a professor who had formed his own party to save the country from Islamization, was shot to death to “defend Dutch Muslims from persecution.” 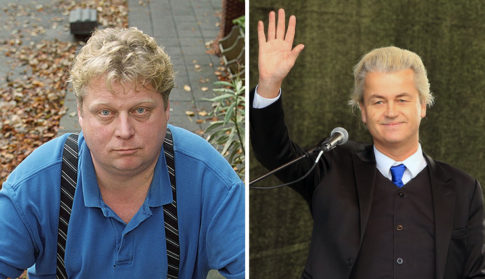 Twelve years ago, Dutch filmmaker Theo van Gogh (left) was assassinated by an Islamist who pinned on van Gogh’s chest a letter threatening the life of Geert Wilders (right). Today Wilders, the most prominent politician in the Netherlands, lives in hiding under round-the-clock protection.

Fortuyn had said, “We have a lot of guests who are trying to take over the house.”

Since then, many Dutch artists have capitulated to fear.

Sooreh Hera, from Iran, submitted her photos to the Gemeentemuseum Museum in The Hague. One of these works depicted Mohammed and Ali. After many threats, the museum proposed that it would acquire the photos without publishing them and that one day, perhaps, when the situation was calmer, they might show them then. Hera refused: it would have been self-censorship, a sad day for the West. Rants Tjan, director of Museum Gouda, bravely offered to exhibit her censored images, but that event was later cancelled, too. Hera was forced to go into hiding.

Paul Cliteur, a critic of multiculturalism, announced that he would no longer write for Dutch newspapers about Islam, for fear of reprisals: “With the murder of van Gogh, everyone who writes takes a certain risk. That is a scary development. What I am doing do is self-censorship, absolutely….”

Then a columnist, Hasna el Maroudi, from the newspaper NRC Handelsblad, stopped writing, after receiving threats.

Amsterdam, a city famous for its exuberant cultural life, had already lived through threats to artists: the occupation by the Nazis during World War II.

Several artists still refuse to mention Theo Van Gogh, so as not to “contribute to… divisions”, according to the New York Times. Translation: They are afraid. Who would not be?

In the Oosterpark, a steel sculpture by the artist Jeroen Henneman, dedicated to Van Gogh, is entitled “De Schreeuw” (“The Scream”). But it is a scream you hardly hear in the Dutch society.

What you do hear is the defiant protest after the conviction of a brave MP, Geert Wilders: “I will never be silent. You will not be able to stop me… And that is what we stand for. For freedom and for our beautiful Netherlands.”

Before being slaughtered, clinging to a basket, Theo van Gogh begged his assassin: “Can we talk about this?”

But can we talk?

1 thought on “The Dutch Death Spiral”