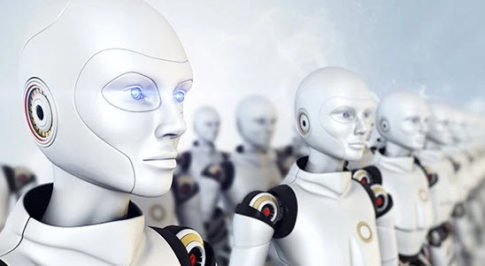 – Rise Of The Machines: Millions Of American Jobs Will Be Wiped Out In The Next Five Years:

There is a paradigm shift coming and it is about to rewrite everything we know about economics, human labor, and government dependence.

Earlier this week Amazon launched its first Amazon Go store, which allows a customer to walk in, grab the items they want, and simply walk out. Everything is tracked utilizing RFID chips, so the second you step out of the store Amazon knows exactly what you’ve purchased and automatically charges your account:

Amazon Go is a system that marries physical stores with advanced algorithms and sensors to eliminate the need for a typical store checkout. Instead of packing all the things you need into a basket or cart and then dragged it through a tedious checkout process, you just grab whatever you need and walk out of the store.

It sounds like a shaky concept at first, but only until you see just how advanced the technology really is. When you first walk into the store, you use your smartphone to open you virtual shopping cart. As you make your way around the store, a vast system of sensor tracks where you are, what you pick up, and what you take with you. The system even knows if you pick something up and then put it back, and will only charge you for things you actually intended to buy.

As Mike Shedlock recently pointed out at Mish Talk, the transition to automated systems like Amazon Go, as well as technologies like self-driving cars and long-haul trucks, has been fast tracked.

We’re no longer talking decades, but rather, a few years before we start to see the direct effects on the labor market:

Once again competition is the driving force that will guarantee success no later than a 2022-2024 time frame. By the end of that period, if not much sooner, long-haul truck jobs will vanish.

Perhaps drivers will be needed for final delivery in cities and remote locations, but the need for long-haul interstate and major state highway drivers will vanish.

My statement that “millions of long haul truck driving jobs will vanish in the 2022-2024 time frame” is likely way off on the low side if one counts Uber, taxi, and chauffeur driven vehicles.

That’s just Uber. And those jobs will vanish. All of them. What about Lyft? Taxis?

We’re talking tens of millions of jobs. And they’ll be gone within half a decade’s time.

The immediate response to such revelations is that there will be widespread societal upheaval.

How will displaced human workers feed their families or keep roofs over their heads?

The answer, according to Silicon Valley, which is driving the new paradigm full force, is quite simple and has been detailed in the highly rated documentary Obsolete from Aaron and Melissa Dykes (available free for Amazon Prime subscribers).

It’s called “universal basic income,” or UBI, and essentially means that every member of society will be given a paycheck to meet their most basic needs.

Basically, a general idleness, an aimlessness of people who could become revolutionary, who could be subjected to civil unrest… who will probably be on social welfare and benefits for the rest of their lives and have nothing else to look forward to.

That’s the direction that the people in this country are actually headed towards.

Just a week and a half after Bilderberg’s June 2016 meeting it was reported that [Silicon Valley tech startup incubator] Y-Combinator was running a basic income experiment.

Billed as the “Social Vaccine of the 21st Century,” in Oakland, California where some 100 families were chosen to receive $1000 or $2000 a month in order to collect valuable date in the pilot on how to implement, manage and scale further UBI incentives.

The trend should be clear. Bilderberg members from around the world are preparing their governments and citizens for the inevitable.

Robotics and artificial intelligence technology are advancing at a pace that will soon replace tens of millions of jobs in key economic sectors that include food service, grocery, transportation and customer service.

What the end result will be is anyone’s guess, but we suspect the transition could destabilize the global economic system, complete with violence and revolution.