– Mark Carney Defends The Bank of England: “We Are Not Robbing The Poor To Pay The Rich”:

In a speech delivered at the Liverpool John Moores University on Monday, Bank of England head, and former Goldman partner, Mark Carney defended his central bank’s near-zero borrowing costs which have been increasingly criticized by local politicians ever since the Brexit vote, claiming that central bank monetary policies have not been the cause behind wealth transfer.

Carney said the BoE’s actions had softened the hit to Britain’s economy since the global financial crisis, easing the blow for poorer households who suffer most from recessions.

“Has monetary policy robbed savers to pay borrowers? Has the MPC been Robin Hood in reverse? In a word, no.”

Which is surprising, because in many more words, some 20 pages worth, in March of this year, the BIS released a research report titled “Wealth inequality and monetary policy“, in which it said that its “simulation suggests that wealth inequality has risen since the Great Financial Crisis. While low interest rates and rising bond prices have had a negligible impact on wealth inequality, rising equity prices have been a key driver of inequality” and conclude that “this suggests that monetary policy may have added to inequality to the extent that it has boosted equity prices.”

So, in more than one word, yes.

That said, we can understand why Carney feels threatened: in October, Prime Minister Theresa May said the BoE’s policy of cutting interest rates to just above zero and buying hundreds of billions of pounds worth of government bonds had “bad side effects” for savers.

Carney said most people whose savings income had been hit by low rates had gained from a rise in value of assets, paradoxically citing data which showed only 2% of households had savings of over 5,000 pounds, but few other assets and did not own a home. Meanwhile, what Carney ignored is that according to the annual high net worth report by Credit Suisse, the net worth of the pinnacle of the global weath pyramid, those 0.7% of global adults who are worth more than $1 million, has nearly doubled from $69.2 trillion in 2010… 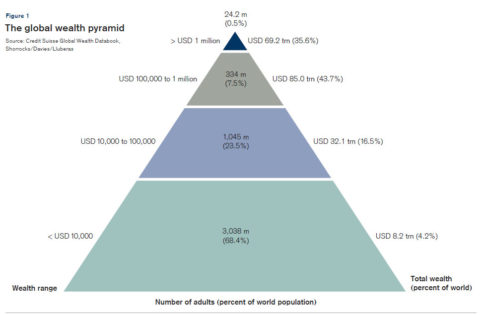 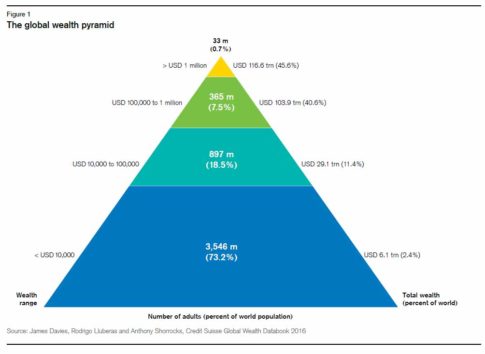 … even as those adults who were worth less than $10,000 in 2010 had a combined net worth of $8.2 trillion, a number which has since declined to $6.1 trillion in 2016 despite a half a billion increase in the sample size, while the combined net worth of the layer worth between $10K and $100K also declined from $32.1 trillion to $29.1 trillion, confirming the rich got richer, while the middle class (and poor) got even poorer.

So if not monetary policy, then what was the culprit according to Carney for record wealth inequality and such political shocks as Brexit, Trump and Renzexit? Here the central bank chief offered a familiar scapegoat, one first proposed by none other than the IMF itself: globalization, which in March the IMF accused of being the catalyst behind rising inequality and market crashes.

In his paper, Carney warned that “to address the deeper causes of weak growth, higher inequality and rising insecurity requires a globalisation that works for all.” Oh, so now, 8 years later they decide that globalization was only working for “some.”

Only Carney took it one step further, and he did not explicitly blame globalization, but rather the threat of doing away with it entirely, and warning about the risk of a return of protectionism in the global economy, a concern which has grown for investors since the election victory of U.S. President-elect Donald Trump. “Turning our backs on open markets would be a tragedy, but it is a possibility. It can only be averted by confronting the underlying reasons for this risk upfront,” he said.

Because why not just blame Trump now: after all, in just a few years when global economies and stock markets are crashing, everyone will be doing it, may as well have a head start.

Finally, Carney reiterated his view that the BoE was prepared to further slam the poor and middle classes by letting British inflation run above its 2% target, in the process hurting those who Carney is suppoedly protecting, and not been a “Robin Hood in reverse to.”

“The MPC is choosing a period of somewhat higher consumer price inflation in exchange for a more modest increase in unemployment,” he said. “There are limits, however, to the extent to which above-target inflation can be tolerated.”

Those limits will be tested when millions of poor people realize just what running “somewhat higher consumer prices” means to their bottom line, and their already soaring anger at a political establishment that continues to test the breaking limits of some 90% of the population just so it can, one day, inflate away the world’s gargantuan debt load.