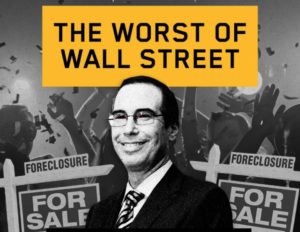 To conclude, this article is primarily written for all my readers who are either Trump supporters, or who reluctantly voted for him. My message to you is that we need to hold this man’s feet to the fire. The election is over, and you got your desired outcome. Now is not the time to be a cheerleader. Now is not the time to behave exactly like Obama zombies did after he became an obvious betrayal. What allowed Obama to do all the bad things he did, was the fact that his supporters made endless excuses for him. Don’t make excuses for Trump. If you do, your life will get a lot worse and this country will decay far more into an authoritarian oligarchy than it already has. It is up to you to make sure he doesn’t become the Wall Street puppet I always feared he would be.

This message has become increasingly important with each passing day, and with every new cabinet disappointment. Mnuchin is not the only one. Trump picked the sister of Blackwater’s Erik Prince for Education Secretary (for more on Prince, see: America’s Top Rogue Mercenary – Blackwater’s Erik Prince is Under Federal Investigation) and Mitch McConnell’s wife for Transportation Secretary (see: Trump Fills the Swamp with Elaine Chao, Mitch McConnell’s Wife, for Transportation Secretary). The swamp is being filled rapidly, and the sooner we admit it, the better.

Those who recognize Trump’s betrayal most quickly will be average Americans who have been preyed upon by some of his cabinet picks. One of these people is Teena Colebrook.

She had voted for the president-elect on the belief that he would knock the moneyed elites from their perch in Washington, D.C. And she knew Trump’s pick for Treasury Steven Mnuchin all too well.

OneWest, a bank formerly owned by a group of investors headed by Mnuchin, had foreclosed on her Los Angeles-area home in the aftermath of the Great Recession, stripping her of the two units she rented as a primary source of income.

“I just wish that I had not voted,” said Colebrook, 59. “I have no faith in our government anymore at all. They all promise you the world at the end of a stick and take it away once they get in.”

Less than a month after his presidential win, Trump’s populist appeal has started to clash with a Cabinet of billionaires and millionaires that he believes can energize economic growth.

The prospect of Mnuchin leading the Treasury Department drew plaudits from many in the financial sector. A former Goldman Sachs executive who pivoted in the early 2000s to hedge fund management and movie production, he seemed an ideal emissary to Wall Street.

When asked on Wednesday about his credentials to be Treasury secretary, Mnuchin emphasized his time running OneWest which not only foreclosed on Colebrook but also thousands of others in the aftermath of the housing crisis caused by sub-prime mortgages.

For Mnuchin, the fundamental problem stems from the Great Recession. His investor group was the sole bidders to take control of the troubled bank IndyMac in 2009. The group struck a deal that left the Federal Deposit Insurance Commission responsible for taking as much as 80 percent of the losses on former IndyMac assets and rebranded the troubled bank as OneWest.

The combination of OneWest’s profitability, government guarantees and foreclosure activities drew the ire of activist groups like the California Reinvestment Coalition. It found the bank to be consistently one of the most difficult to work out loan modifications with even though OneWest never drew a major response from government regulators.

By June of 2014, five years after taking over OneWest, Mnuchin sold the bank for $3.4 billion at a tremendous profit.

For much more on this topic see: There Will Be Swamp – Steve Mnuchin Confirms Treasury Secretary Nod.

Over five years, she tried unsuccessfully to adjust her loan with OneWest through the Treasury Department’s Home Affordable Modification Program. But she said that One West Bank lost paperwork, provided conflicting statements about ownership of the loan and fees and submitted charges that were unverified and caused her loan balance to balloon. By the time she lost her home in foreclosure in April 2015, the payoff balance totaled $517,662.

Colebrook said she is still challenging the foreclosure in court.

Trump won’t be draining any swamp. It pains me to say this, because as I noted in my first post-election article, Americans Roll the Dice With President Donald Trump, I was hoping Trump would do the right thing and become a great President:

Donald Trump has a historic opportunity to be a great President. Barack Obama was presented with a similar opportunity eight years ago and he immediately squandered it by surrounding himself with miserable, status quo economic and foreign policy insiders. He ditched the people who believed in him and voted for him, and in doing so cemented his legacy as that of a man who coddled oligarchs, kept banking criminals out of jail and further incinerated the Middle East. He’ll also be seen as the man whose tremendous disappointments as commander-in-chief led to the emergence and elevation of Donald Trump.

It looks like Trump is immediately filling his administration with swamp creatures, just like Obama did before him. The time for cheerleading is over. The time for accountability is now.