The decline of Britain’s naval power in a handy table. Some of her current ships are ageing and may not even be replaced. It may get worse. pic.twitter.com/nw9ZG1x7EJ 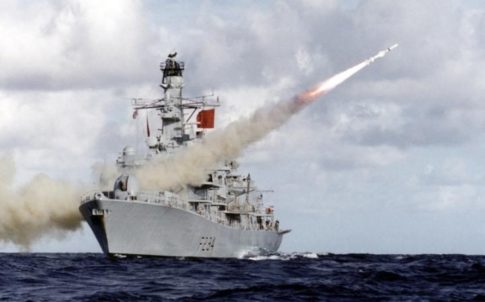 – Royal Navy to lose missiles and be left only with guns:

Royal Navy warships will be left without anti-ship missiles and be forced to rely on naval guns because of cost-cutting, the Ministry of Defence has admitted.

The Navy’s Harpoon missiles will retire from the fleet’s frigates and destroyers in 2018 without a replacement, while there will also be a two year gap without helicopter-launched anti-shipping missiles.

Naval sources said the decision was “like Nelson deciding to get rid of his cannons and go back to muskets” and one senior former officer said warships would “no longer be able to go toe-to-toe with the Chinese or Russians”. 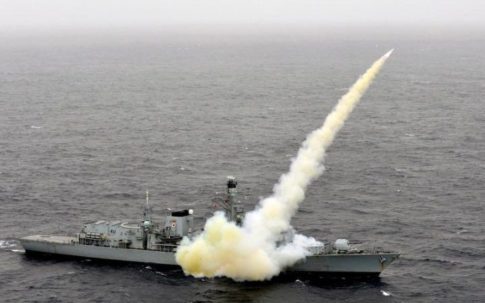 MS Montrose testing a Harpoon missile, which has a range of up to 80 miles Credit:  Crown Copyright

Harpoon missiles are unlikely to be replaced for up to a decade, naval sources said, leaving warships armed only with their 4.5in Mk 8 guns for anti-ship warfare. Helicopter-launched Sea Skua missiles are also going out of service next year and the replacement Sea Venom missile to be carried by Wildcat helicopters will not arrive until late 2020.

One Naval source said: “We will be losing our missile capability in total for two years. We will still have the gun, but the range of that is about 17 miles, compared to Harpoon, which is about 80 miles”.

The source said the new helicopter-launched Sea Venom missile will have a shorter range than the Harpoon and helicopters are also vulnerable to bad weather and being shot down.

“The moment you put it up against a frigate or a destroyer, you will be inside their weapons range,” the source added.

Rear-Adml Chris Parry, said: “It’s a significant capability gap and the Government is being irresponsible. It just shows that our warships are for the shop window and not for fighting.”

Lord West of Spithead, a former First Sea Lord, said: “This is just another example of where the lack of money is squeezing and making the nation less safe.

“We will have this gap of several years without missiles. Well, that’s fine if you don’t have to fight anybody in the meantime.”

The Royal Air Force has long axed its own anti-ship missiles.

Nick Childs, a naval expert at the International Institute for Strategic Studies, said Britain was cutting its anti-ship missiles just as America had decided they were becoming more critical to maritime fighting.

“It must be a great concern that this capability is going to be removed without immediate or direct replacement because we are moving into an era of concern about a more contested maritime environment,” he said.

A spokesman for the Navy said: “All Royal Navy ships carry a range of offensive and defensive weapons systems.  Backed by a rising defence budget and a £178 billion equipment plan, upgrade options to all our weapons are kept under constant review.”