Trump’s decision not to appoint a special prosecutor to pursue a criminal probe into Hillary Clinton’s email server or the Clinton Foundation, confirmed by top advisor Kellyanne Conway on Tuesday morning, appears to be is the first major break the president-elect has had with his diehard fans. In what The Hill believes was the first indication of “strains in the relationship” conservatives expressed “feelings of betrayal” on Tuesday after Conway said – and Trump subsequently confirmed during his meeting with the NYT – that the incoming administration would decline to pursue a criminal case against former rival Hillary Clinton.

And indeed, some prominent conservative critics were livid.

Breitbart News, whose former executive chairman, Steve Bannon was recently named as a senior advisor in his White House, slammed Trump’s decision as a “broken promise.”

As happy as I am that our long national nightmare’s over, NO president shld be blocking investigators from doing their jobs. #EqualUnderLawhttps://t.co/8JCQOO0dSF

Even Judicial Watch, the conservative watchdog organization that has pursued Clinton’s emails for more than a year and whose relentless FOIAs into the Clinton inner sanctum – alongside with the Wikileaks revelations – played a critical part in Hillary Clinton’s loss, called on Trump to reverse his stance.

“Donald Trump must commit his administration to a serious, independent investigation of the very serious Clinton national security, email, and pay-to-play scandals,” organization president Tom Fitton said in a statement. “If Mr. Trump’s appointees continue the Obama administration’s politicized spiking of a criminal investigation of Hillary Clinton, it would be a betrayal of his promise to the American people to ‘drain the swamp’ of out-of-control corruption in Washington, DC.”

“President-elect Trump should focus on healing the broken justice system, affirm the rule of law and appoint a special prosecutor to investigate the Clinton scandals.”

To be sure, Trump’s rather abrupt announcement he was willing to mend his pained relationship with Clinton flew in the face of over a year of Congressional hearings and probes, and prompted many to speculate if there was some behind the scenes arrangement between Hillary and Trump.

Congressional Republicans dragged FBI Director James Comey and Attorney General Loretta Lynch to the Capitol on multiple occasions to explain their decision. Lawmakers claimed that the Justice Department officials had created a “double standard” in declining to press charges.

On the other hand, the possibility of a politically motivated probe ordered by Trump had riled legal experts, who called it a potential gross breach of the sanctity of the rule of law.

But Trump’s base in the Republican Party had cheered his promise with repeated chants of “lock her up” and signs reading “Hillary for prison.”

And then, on Tuesday morning, Trump advisor Kellyanne Conway suggested on MSNBC that Trump is backing away from the earlier pledge, in part to “help [Clinton] heal.”

“I think when the president-elect, who’s also the head of your party, tells you before he’s even inaugurated that he doesn’t wish to pursue these charges, it sends a very strong message, tone and content,” she said.

Later in the day, in an interview with the New York Times, Trump denied that his apparent change of heart would deeply disturb his supporters. “I think I will explain it that we in many ways will save our country,” he told reporters and editors from the newspaper.

Former New York City Mayor Rudy Giuliani, who is in the running for the position of Secretary of State although appears to be losing to Mitt Romney as of this afternoon, appeared supportive of the decision.

“Look, there’s a tradition in American politics that after you win an election, you sort of put things behind you,” Giuliani told reporters at Trump Tower in New York. “And if that’s the decision he reached, that’s perfectly consistent with sort of a historical pattern of things come up, you say a lot of things, even some bad things might happen, and then you can sort of put it behind you in order to unite the nation.

As The Hill adds, Trump has yet to make a decision on the future of FBI Director James Comey, whose job might be in jeopardy, the president-elect has suggested, for failing to recommend charges against Clinton. Comey, a Republican, is scheduled to continue his term until 2023, though Trump has suggested he may ask him to leave office sooner.

“I think that I would rather not comment on that yet,” Trump said on CBS’s “60 Minutes” earlier this month.  “I haven’t made up my mind” although like with the case of Clinton, the most likely explanation is that Trump was a lot of bark, and very little bite, and Comey will remain in his post.

As for Trump’s loyal, at times rabid, fan base, betrayed or not it will have to decide how to deal with disappointment and flip-flops by the billionaire real estate investor (perhaps with Mitt Romney by his side) because as today’s most glaring yet example demonstrates, disappointments will come and they will come fast and furious over the next two months as Trump finalizes the policies that he will begin to enact after his inauguration in two months’ time. 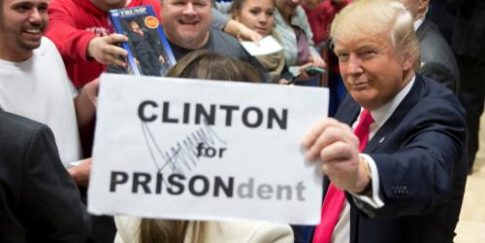