Months after Christie, having lost his presidential primary to Donald Trump, had ambitions for becoming Trump’s vice presidential candidate, Christie just suffered another dramatic fall from grace after President-elect Donald Trump shuffled his transition team three days after his surprising victory, and increased the influence of Alabama Sen. Jeff Sessions, one of Washington’s most vocal critics of illegal immigration, while diluting that of Christie.

According to the WSJ, Chris Christie was removed as Trump campaign transition chairman on Friday, a position that will now be filled by Vice President-elect Mike Pence, the transition team confirmed. Christie will remain on the transition team’s executive committee as a vice chairman, along with Ben Carson, both largely figured positions; they will be also joined by retired Lt. Gen. Michael Flynn, former New York Mayor Rudy Giuliani and Mr. Sessions.

The most drastic change on staff was the elevation of Rick Dearborn, the staff chief of Mr. Sessions’ Washington office, into the role of transition director. The move sidelined Rich Bagger, a top ally of Mr. Christie’s who held that role for the last several months. Mr. Bagger couldn’t be reached for comment.

Aside from the now effective elimination of Chris Christie from any positions of power in the Trump team, what is notable is the rapid rise of Jeff Sessions, one of the handful of names tossed as Trump’s candidate for Treasury Secretary, and whose biggest corporate donors are listed below: 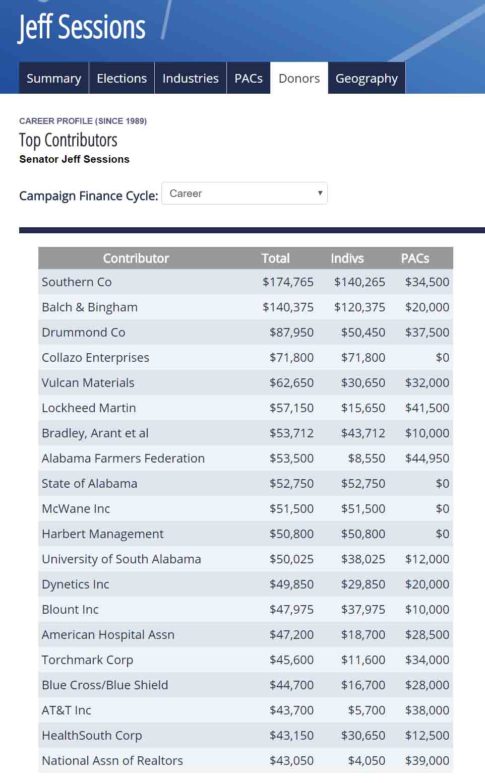 Finally, here are the other new members of the Trump executive transition committee: