JARKARTA: The biggest street protest in years shook this sprawling capital today in a stark display of the more conservative, militant strain of Islam taking hold in the world’s largest Muslim country. (Which Hillary Clinton has called a “shining example of a ‘moderate’ Islamic country”) 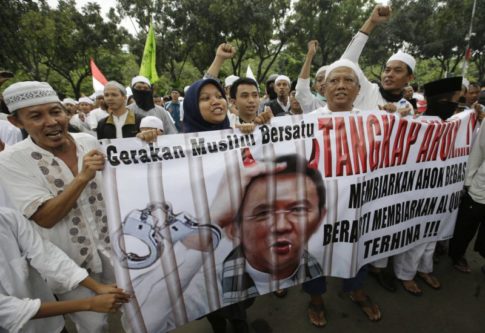 WSJ  Police said an estimated 100,000 people turned out for a rally called by hard-line Muslim groups against the capital’s Christian governor, whom they accuse of having committed blasphemy. Blasphemy is a criminal offense in Indonesia and prosecutions have increased in the past decade. 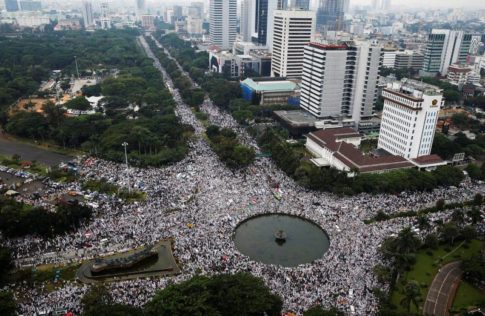 President Joko Widodo had met with other political leaders amid calls for calm, but critics say he has been too slow since taking office in 2014 to respond to worsening tension for fear of being labeled anti-Muslim. “Religiosity is rising, especially among the middle class,” said Yon Machmudi, an Islamic politics expert at the University of Indonesia. “A sense of identification is increasing.’’

Protesters were taking aim at Basuki Tjahaha Purnama, known as Ahok, who is the most prominent politician among the country’s often-persecuted, ethnic Chinese minority. He was elected deputy governor in 2012 and elevated to the top job in 2014 after his boss, Mr. Widodo, was elected president. Some hard-liners had tried to block his ascent then, saying Muslims shouldn’t be ruled by a “kafir,” or nonbeliever.

Mr. Purnama, now running for re-election, angered the groups again by citing a verse of the Quran in a public address in late September. He has apologized and said he would cooperate with a police investigation, but has since been the target of protests.  Vice President Jusuf Kalla met a group of protest leaders and said afterward that police would pursue a blasphemy case against Mr. Purnama.

Nearly 90% of Indonesia’s 250 million people are Muslim and are becoming more radical every year as seen by head scarves for women, once rare, are now widely worn and Islamic schools are expanding.

A movement to ban alcohol is gaining steam and sales have been banned from convenience stores. Travel to Mecca for the minor pilgrimage of umrah, once a relatively uncommon undertaking for middle-class Indonesians, is newly popular.

Security experts say the rising conservatism paves the way for potential violence, pointing to some religious hard-liners who have rebranded themselves as cells of Islamic State.

“What we’ve seen in the last 18 months to two years is increasing crossover from organizations that started out ‘nonviolent but hard-line’ to organizations which are now committed to using violence,” said Sidney Jones, director of the Jakarta-based Institute for Policy Analysis of Conflict.

Gang of Indonesian Muslim men (below) beat to death members of Ahmadiyah sect, which Muslims reject as part of Islam because of it’s call for non-violence.