Among the latest set of Podesta releases, was the following email sent on April 15, 2014 by Google’s Eric Schmidt titled “Notes for a 2016 Democratic Campaign” in which the Google/Alphabet Chairman tells Cheryl Mills that “I have put together my thoughts on the campaign ideas and I have scheduled some meetings in the next few weeks for veterans of the campaign to tell me how to make these ideas better.  This is simply a draft but do let me know if this is a helpful process for you all.”

While there are numerous curious nuances in the plan, presented below in its entirety, the one section that caught our – and Wikileaks’ attention – is the following which implicitly suggests Google planned the creation of a voter tracking database, using smart phones:

Key is the development of a single record for a voter that aggregates all that is known about them.  In 2016 smart phones will be used to identify, meet, and update profiles on the voter.  A dynamic volunteer can easily speak with a voter and, with their email or other digital handle, get the voter videos and other answers to areas they care about (“the benefits of ACA to you” etc.)

As a reminder, two days ago it was revealed that just days prior to the April 15, 2014 email, Schmidt had sent another email in which he expressed his eagerness to “fund” the campaign efforts and wants to be a “head outside advisor.” In the email from John Podesta to Robby Mook we learned that:

I met with Eric Schmidt tonight. As David reported, he’s ready to fund, advise recruit talent, etc. He was more deferential on structure than I expected. Wasn’t pushing to run through one of his existing firms. Clearly wants to be head outside advisor, but didn’t seem like he wanted to push others out. Clearly wants to get going. He’s still in DC tomorrow and would like to meet with you if you are in DC in the afternoon. I think it’s worth doing. You around? If you are, and want to meet with him, maybe the four of us can get on t

Another email from February 2015 suggested that the Google Chairman remained active in its collaboration with the Clinton campaign: John Podesta wrote that Eric Schmidt met with HR “about the business he proposes to do with the campaign. He says he’s met with HRC” and adds that “FYI. They are donating the Google plane for the Africa trip” 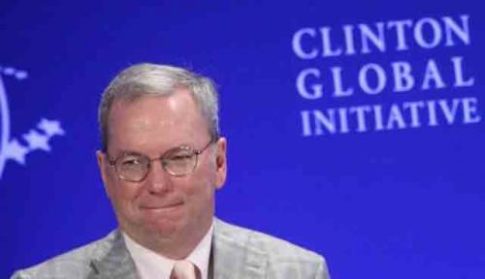 The remainder of Schmidt’s proposed plan, presented in its entirety below, is just as troubling.

Here are some comments and observations based on what we saw in the 2012 campaign.  If we get started soon, we will be in a very strong position to execute well for 2016.

Lets assume a total budget of about $1.5Billion, with more than 5000 paid employees and million(s) of volunteers.  The entire startup ceases operation four days after November 8, 2016.  The structure includes a Chairman or Chairwoman who is the external face of the campaign and a President who is the executive in charge of objectives, measurements, systems and building and managing the organization.

Every day matters as our end date does not change.  An official campaign right after midterm elections and a preparatory team assembled now is best.

The campaign headquarters will have about a thousand people, mostly young and hardworking and enthusiastic.  Its important to have a very large hiring pool (such as Chicago or NYC) from which to choose enthusiastic, smart and low paid permanent employees.  DC is a poor choice as its full of distractions and interruptions.  Moving the location from DC elsewhere guarantees visitors have taken the time to travel and to help.

The key is a large population of talented people who are dying to work for you.  Any outer borough of NYC, Philadelphia, Atlanta, Boston are all good examples of a large, blue state city to base in.

Employees will relocate to participate in the campaign, and will find low cost temporary housing or live with campaign supporters on a donated basis.  This worked well in Chicago and can work elsewhere.

The computers will be in the cloud and most likely on Amazon Web services (AWS).  All the campaign needs are portable computers, tablets and smart phones along with credit card readers.

3. The pieces of a Campaign

Its important to have strong field leadership, with autonomy and empowerment.  Operations talent needs to build the offices, set up the systems, hire the people, and administer what is about 5000 people.  Initial modeling will show heavy hiring in the key battleground states.  There is plenty of time to set these functions up and build the human systems.  The field is about organizing people, voter contact, and get out the vote programs.

For organizing tools, build a simple way to link people and activities as a workflow and let the field manage the system, all cloud based.  Build a simple organizing tool with a functioning back-end.  Avoid deep integration as the benefits are not worth it.  Build on the cloud.  Organizing is really about sharing and linking people, and this tool would measure and track all of it.

There are many other crucial early investments needed in the field: determining the precise list of battleground states, doing early polling to confirm initial biases, and maintaining and extending voter protection programs at the state level.

Key is the development of a single record for a voter that aggregates all that is known about them.  In 2016 smart phones will be used to identify, meet, and update profiles on the voter.  A dynamic volunteer can easily speak with a voter and, with their email or other digital handle, get the voter videos and other answers to areas they care about (“the benefits of ACA to you” etc.)

The scenario includes a volunteer on a walk list, encountering a potential voter, updating the records real time and deepening contact with the voter and the information we have to offer.

A large group of campaign employees will use digital marketing methods to connect to voters, to offer information, to use social networks to spread good news, and to raise money.  Partners like Blue State Digital will do much of the fund raising.  A key point is to convert BSD and other partners to pure cloud service offerings to handle the expected crush and load.

Build tools that measure the rate and spread of stories and rumors, and model how it works and who has the biggest impact.  Tools can tell us about the origin of stories and the impact of any venue, person or theme.  Connect polling into this in some way.

Find a way to do polling online and not on phones.

For each voter, a score is computed ranking probability of the right vote.  Analytics can model demographics, social factors and many other attributes of the needed voters.  Modeling will tell us what who we need to turn out and why, and studies of effectiveness will let us know what approaches work well.    Machine intelligence across the data should identify the most important factors for turnout, and preference.

It should be possible to link the voter records in Van with upcoming databases from companies like Comcast and others for media measurement purposes.

The analytics tools can be built in house or partnered with a set of vendors.

The database of voters (NGP Van) is a fine starting point for voter records and is maintained by the vendor (and needs to be converted to the cloud).  The code developed for 2012 (Narwahl etc.) is unlikely to be used, and replaced by a model where the vendor data is kept in the Van database and intermediate databases are arranged with additional information for a voter.

Quite a bit of software is to be developed to match digital identities with the actual voter file with high confidence.  The key unit of the campaign is a “voter”, and each and every record is viewable and updatable by volunteers in search of more accurate information.

In the case where we can’t identify the specific human, we can still have a partial digital voter id, for a person or “probable-person” with attributes that we can identify and use to target.  As they respond we can eventually match to a registered voter in the main file.  This digital key is eventually matched to a real person.

Its important that all the player in the campaign work at cost and there be no special interests in the financing structure.  This means that all vendors work at cost and there is a separate auditing function to ensure no one is profiting unfairly from the campaign.  All investments and conflicts of interest would have to be publicly disclosed.  The rules of the audit should include caps on individual salaries and no investor profits from the campaign function.  (For example, this rule would apply to me.)

a) early build of an integrated development team and recognition that this is an entire system that has to be managed as such
b) decisions to exclusively use cloud solutions for scalability, and choice of vendors and any software from 2012 that will be reused.
c) the role of the smart phone in the hands of a volunteer.  The smart phone manages the process, updates the database, informs the citizen, and allows fundraising and recruitment of volunteers (on android and iphone).
d) early and continued focus of qualifying fundraising dollars to build the field, and build all the tools.  Outside money will be plentiful and perfect for TV use.  A smart media mix tool tells all we need to know about media placement, TV versus other media and digital media.