While we explained earlier today why the DOJ and FBI had found themselves in the awkward position of knowing that Anthony Weiner’s computer contained thousands of Huma Abedin emails sent from Hillary Clinton’s private server, yet were unable to access them, we noted it was only a matter of time before this particular hurdle was rectified. A few hours later, according to CBS’ Jeff Pegues, in the matter of the FBI having much needed access to begin poring over Weiner’s emails, which we now know number roughly 650,000 (and thus will take the FBI months to pore over), the FBI has just obtained the needed warrant.

As NBC confirms, the FBI obtained a warrant to search emails related to the Hillary Clinton private server probe that were discovered on ex-congressman Anthony Weiner’s laptop. The warrant came two days after FBI director James Comey revealed the existence of the emails, which law-enforcement sources said were linked to Weiner’s estranged wife, top Clinton aide Huma Abedin. The FBI already had a warrant to search Weiner’s laptop, but that only applied to evidence of his allegedly illicit communications with an underage girl.

The warrant came moments after Democratic Senate Minority Leader Harry Reid scolded Comey, saying in a letter that he “demonstrated a disturbing double standard for the treatment of sensitive information, with what appears to be clear intent to aid one political party over another.“

Reid added that his office determined that Comey may have violated the Hatch Act, which bars government officials from using their authority to influence elections.

The following screengrab from WaPo, perhaps summarizes best how the democrats’ take on things has changed dramatically over the past few weeks: 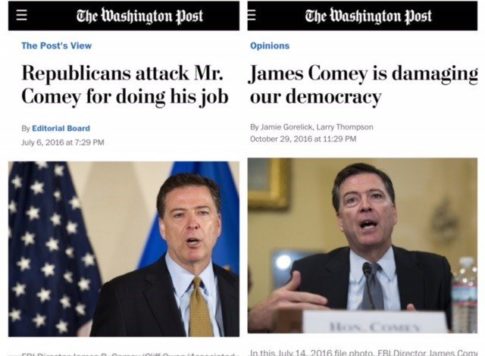 Meanwhile, the CBS reporter also noted that according to law enforcement sources HumaAbedin Is cooperating and “seemed surprised that emails were there.”

#developing#law enforcement sources also say #HumaAbedin Is cooperating and “seemed surprised that emails were there.”

Finally, Pegues also points out that after having fieled much pressure from Democrats for the past 48 hours, FBI Director Comey has been quietly reaching out to members of Congress as pressure mounts on him.

#BREAKING News #FBI Director #Comey has been quietly reaching out to members of #Congress as pressure mounts on him.

So will the FBI promptly announce that nothing of material important was found among Weiner’s emails, or will it now begin a protracted, intensive investigation? Will Comey resigns? Will Huma quit from her role in the Clinton campaign? Will Loretta Lynch take some of the blame? We hope to have some of these much needed answers in the coming days as the FBI’s reopened probe begins gaining traction.