As Breitbart’s Thomas Williams reports, Brock University in Ontario, Canada, for instance, has set up a website laying out its “Halloween Costume Vetting Protocol,” complete with a list of offending costumes and pictures of inappropriate wear. 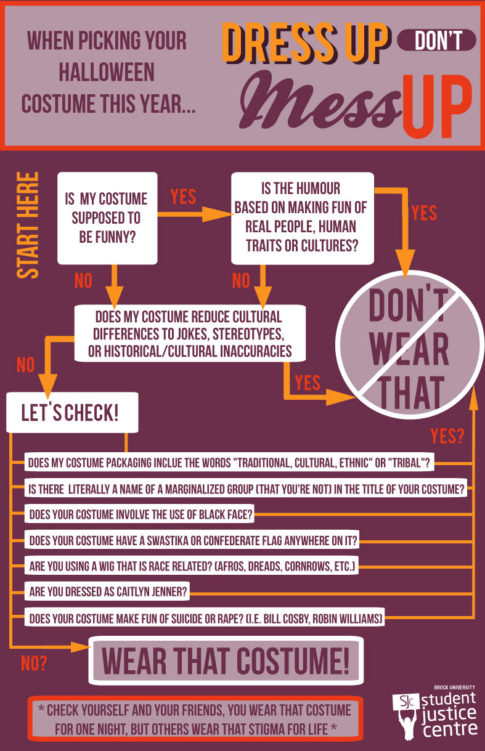 “If a member of your party is denied entry because of their costume, they will be escorted to a space where they can change or remove the offending item,” according to the protocol. “They will not lose their place in line during this process, and can enter Isaac’s once the costume has been deemed appropriate by team of Isaac’s Bar and Grill Management and Student Justice Centre Staff.”

As one disturbed commenter wrote, “Obey the Thought Police. Welcome to 1984.”

Further south, at the University of Florida, officials have similarly warned students about sporting offensive costumes, once again appealing to “diversity.”

“Some Halloween costumes reinforce stereotypes of particular races, genders, cultures, or religions,” the university noted. “Regardless of intent, these costumes can perpetuate negative stereotypes, causing harm and offense to groups of people.”

In a scathing article in Forbes last spring, the noted historian Paul Johnson called political correctness “one of the most dangerous intellectual afflictions ever to attack mankind.”

PC has “enormous appeal to the semieducated,” Johnson observed, and it “appeals to pseudo-intellectuals everywhere, since it evokes the strong streak of cowardice notable among those wielding academic authority nowadays.”

“Any empty-headed student with a powerful voice can claim someone (never specified) will be ‘hurt’ by a hitherto harmless term, object or activity and be reasonably assured that the dons and professors in charge will show a white feather and do as the student demands,” he said.

“Thus, there isn’t a university campus on either side of the Atlantic that’s not in danger of censorship,” he concluded.

If in spite of all warnings any precious flower happens to be traumatized by a particular costume at the University of Florida, officials have set up an emergency hotline to help soothe anxious spirits.

If you are “troubled by an incident,” the website counseled, “please take advantage of the 7 day a week presence of the U Matter, We Care program,” which includes an email address as well as “a 24/7 counselor in the Counseling and Wellness Center available to speak by phone.”

Not content with coddling the victims of costume abuse, the university is also prepared to punish and reeducate offenders.

The eerily named “Bias Education and Response Team” at the University of Florida is ready to “respond to any reported incidents of bias, to educate those that were involved, and to provide support by connecting those that were impacted to the appropriate services and resources.”

The good news is that there are still plenty of unprotected groups.

Priests, nuns, rabbis, and police officers are still fair game and can be ridiculed at will. Some deep-seated prejudices are just too fun to give up.