“Somebody with a good sense of humour.” 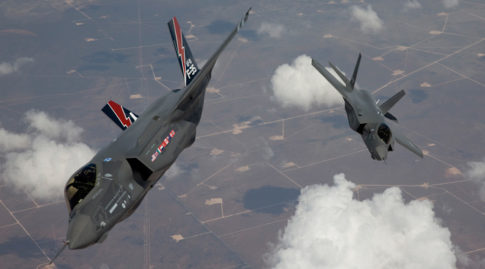 The United States has announced it will deploy its controversial state-of-the-art F35 jets on Iwakuni military base in Japan in 2017. According to Japanese media, a total of 16 planes are expected at the compound.

On its official Twitter account, the US Forces in Japan announced Washington will deploy F35 aircraft to its Marine Corps base in the city of Iwakuni.

According to Japan’s Kyodo news agency, the notification for Tokyo is already in place. “US officially notifies Japan of deployment of 16 F-35 fighters,” the agency says.

In August, the Japanese government informed the authorities of Iwakuni that the US was planning to deploy 16 of its F35 fighters at the base, starting in 2017. The first batch of 10 planes is set to arrive in January, while six more are expected to be stationed by August 2017, Japan Times reported.

The jets will replace the F/A-18 fighters and the AV-8 Harrier jets currently stationed in Iwakuni. Japan would hence become the first foreign US base to get F35 aircraft.

The F-35 Lightning II, primarily developed by US manufacturer Lockheed Martin, is part of a F35 family of all-weather stealth fighters. The aircraft specializes in hitting ground objects as well as performing air defense missions. On August 2, the US Air Force announced the first batch of F-35A fighters to be combat-ready.

Apart from Iwakuni base, Washington is hosting most of its military might at the Japanese island of Okinawa. Several major US military compounds there are accommodating roughly 30,000 military personnel, according to Reuters.

The presence of the US troops however has been an issue of numerous tensions with the local population. In June, Okinawa saw one of the biggest demonstrations in two decades, involving at least 50,000 people. The citizens rallied against the US military presence after a local woman was murdered by an ex-Marine and a string of other incidents.

In late September, two Okinawa villages filed a lawsuit against the local government after it allowed US military construction of two heliports on the only virgin forest remaining in Okinawa Prefecture.

While the government maintains that the completion of helipads will benefit the people of Okinawa, the villages of Higashi and Kunigami around the Northern Training Area have filed a lawsuit at the Naha District Court, citing noise complaints.

The two helipads, which were completed in 2014, are currently being used by the US Marines. Helicopters taking off and landing at these two sites cause constant noise pollution, the villagers claimed.