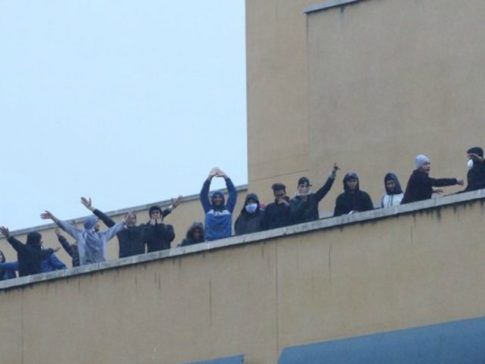 – Migrants Smash Up Deportation Centre, Protest for 11 Hours on Roof:

Around 40 predominantly Algerian illegal migrants held a rowdy protest in Spain, smashing furniture before climbing onto the roof of their accommodation.

The migrants were seen screaming “freedom, freedom” from the rooftop in Madrid, where they spent 11 hours. Reports also emerged of security cameras covered up and a door being broken.

“We are trying to negotiate with them… We’ll see if they come down by themselves,” the national police spokesman in Madrid told AFP. “Police are in control of the situation,” he added.

A spokesman for the city hall said no one had been injured in the mutiny and the mayor, Manuela Carmena, also said that she was ready to attempt a mediation alongside the district authorities.

“Events at the detention centre continue to worry me,” the mayor said on Twitter. “Human rights are the priority.”

Migrants still up on top of the Foreigners Detention Center’s roof, wet and cold after raining during the night. #CIEsNO #Spain #Madrid pic.twitter.com/idMmbddy0k

The migrants were staying at a centre for people who have come to Spain illegally, without a residence permit, and are in the process of being deported.

Javier Barbero, Madrid Council security spokesman, implied the protest was justified due to problems in the immigration system. He told Euronews:

“This [detention centre] is a failed experiment, as the Mayor of Madrid said some months ago… these people are being denied their freedom because of an administrative issue, I don’t think that’s fair.

“Right now the important thing is the health and safety of the people who are in there.”

Critics, however, argue that Algeria (where most of the men are from) is a safe country and the migrants had no right to be in Spain.

At the beginning of this year, Germany announced it would stop accepting asylum seekers from Algeria – along with Morocco and Tunisia – because it was deemed safe to return to.

The nations were added to Germany’s list of “safe countries of origin”, meaning that anyone from those countries seeking refuge was unlikely to be granted asylum.