– Meet The Man Who Can Expose “The Real Hillary Clinton Scandal”:

We have written frequently about the internal Clinton Foundation power struggle between Chelsea Clinton and Doug Band over the previous couple of weeks (see here, here and here).  It all started back in 2011 when, as Chelsea started to take a more senior role at the Clinton Foundation, she became increasingly concerned about an internal audit that exposed glaring conflicts of interest throughout the Foundation with an emphasis on Doug Band and his company, Teneo, who she thought had inappropriately sought favors from the State Department during Hillary’s tenure as Secretary of State.  A Politico article from March 2015, summarized Chelsea’s rise at the Foundation and how it threatened some long-time Clinton allies who had grown quite accustomed to the status quo.

But Chelsea Clinton’s rise at times has seemed to threaten some veteran Clinton aides who had carved out influential—and lucrative—positions after long service with her parents. She is blamed in some quarters for marginalizing both Lindsey and Doug Band, who rose from the president’s body man to build and help run the foundation’s Clinton Global Initiative. A third Clinton veteran, Ira Magaziner, saw his portfolio at the foundation diminished during Braverman’s tenure, and sources say Magaziner’s role remains under scrutiny.

Now, new WikiLeaks emails reveal additional details behind the the man, Eric Braverman, who was brought in as CEO by Chelsea to change the controversial practices of the Foundation but abruptly resigned a short time later after being pushed out by long-time Clinton loyalists who had apparently grown very comfortable with the status quo.

Below is the new email exchange which begins when Neera Tanden warns John Podesta to “keep tabs on Doug Band” who she assumed was the insider who told NBC to “follow the money and find the real HRC scandal.”  Interestingly, John Podesta writes back quickly to identify the real source as former Clinton Foundation CEO Eric Braverman which seems to be shocking to Tanden who replies simply, “Holy Moses.” 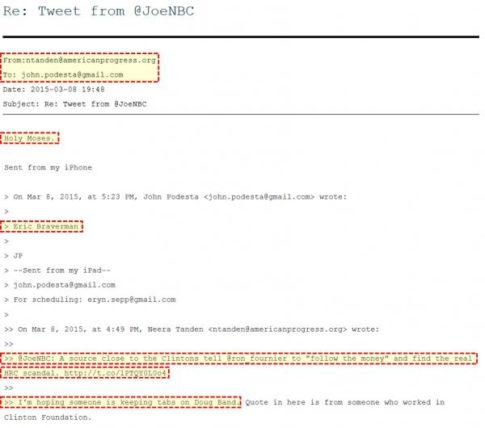 So who is Eric Braverman?  The following excerpts from a Politico article offer the best summary of Braverman and his efforts, as a newly installed CEO, to breakup the Clinton Foundation scandal machine only to be pushed out by Clinton loyalists after only a year and a half in his new position.

In December [2014], the board of the Bill, Hillary and Chelsea Clinton Foundation approved a salary of more than $395,000, plus bonus, for its Yale-educated CEO, Eric Braverman, while voting to extend his board term through 2017, according to sources familiar with the arrangement. Braverman, who had worked with Chelsea Clinton at the prestigious McKinsey & Company consultancy, had been brought in with the former first daughter’s support to help impose McKinsey-like management rigor to a foundation that had grown into a $2 billion charitable powerhouse.

But in January, only weeks after the board’s show of support and just a year and a half after Braverman arrived, he abruptly resigned, and sources tell  Politico his exit stemmed partly from a power struggle inside the foundation between and among the coterie of Clinton loyalists who have surrounded the former president for decades and who helped start and run the foundation. Some, including the president’s old Arkansas lawyer Bruce Lindsey, who preceded Braverman as CEO, raised concerns directly to Bill Clinton about the reforms implemented by Braverman, according to sources, and felt themselves marginalized by the growing influence of Chelsea Clinton and the new CEO she had helped recruit.

The previously untold saga of Braverman’s brief, and occasionally fraught tenure trying to navigate the Clintons’ insular world highlights the challenges the family has faced trying to impose rigorous oversight onto a vast global foundation that relies on some of the same loyal megadonors Hillary Clinton will need for the presidential run sources have said she is all but certain to launch later this year.

Already, a spate of recent news stories in  Politico and elsewhere have highlighted questions about the foundation’s aggressive fundraising both before and during Braverman’s tenure, including the  news that the foundation had been accepting contributions from foreign governments with  lax oversight from the State Department when Hillary Clinton was secretary of state. The foundation has been Clinton’s main public platform since she left State in February 2013.

The hiring a few months later of Braverman, who had been a partner in McKinsey’s Washington office, was seen as validation of Chelsea Clinton’s view that the foundation needed to address recommendations from a 2011 audit for tighter governance and budgeting, as well as more comprehensive policies to vet donors and avoid conflicts of interest.

When Braverman arrived to replace Lindsey as CEO, he moved quickly to adopt the auditor’s recommendations, and then some. He diversified the foundation’s board beyond the Clintons and their longtime political allies and restructured its finance department. He oversaw the creation of a $250 million endowment and implemented data-driven analytics to measure the effectiveness of foundation programs.

No public explanation was offered for Braverman’s resignation.

Of course, given that the email exchange between Podesta and Tanden, and the following tweet from NBC’s Joe Scarborough,  occurred just days after Braverman was relieved of his duties in March 2015 it does seem likely that he was the “source close to the Clintons” who told Ron Fournier “to follow the money and find the real HRC scandal.”

“@JoeNBC: A source close to the Clintons tell @ron_fournier to “follow the money” and find the real HRC scandal. http://t.co/lPTQY0L0o4“

Ironically, Braverman’s resignation also came shortly after the following email from Huma Abedin showing that Hillary directly approached the King of Morocco to host a meeting of the Clinton Global Initiative.  In return, the King had promised “$12 million both for the endowment and to support the meeting.”  Huma concludes her email by saying “she [Hillary] created this mess and she knows it.” 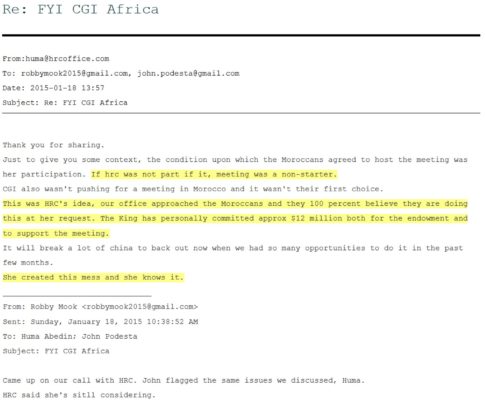 So was this the questionable “contribution from foreign governments with  lax oversight” that ultimately caused Braverman to resign?

More importantly, where is Eric Braverman now?  Clearly, at one point, Braverman expressed some interest in exposing the deep corruption within the Clinton Foundation…now, with all of the new WikiLeaks disclosures, would seem like an opportune time to do just that.