Obamacare premiums are skyrocketing out of sight. A jump of a mere 30% looks like a good deal compared to jumps of over 50% in six states, and 93% in New Mexico.

Congratulations are in order for those living in a handful of states whose premiums only rose 20%.

Finalized rates for big health insurance plans around the country show the magnitude of the challenge facing the Obama administration as it seeks to stabilize the insurance market under the Affordable Care Act in its remaining weeks in office.

“The situation is serious,” said Alissa Fox, senior vice president of the Office of Policy and Representation for the Blue Cross Blue Shield Association. “The reason the premiums are where they are is that the people we are covering have serious conditions and they’re using a lot of medical services because of their chronic illnesses. That’s clear. And there’s not enough young, healthy people to balance out those costs.”

In Minnesota, for example, Blue Cross Blue Shield is pulling its preferred provider organization plans from the state’s online exchange, MNSure, and the narrow network product has been approved for an average rate increase of 55%.

Democratic Gov. Mark Dayton told local reporters that the law is “become unaffordable for many Minnesotans, a growing number with these rate hikes” and that federal and state action is necessary.

House Speaker Paul Ryan, a Wisconsin Republican, has gone further and said the insurance markets are already in a “death spiral,’” and that “we’re going to have to change this thing.”

The danger for insurers and supporters of the law now is that high prices and limited choices further deter low-risk people from signing up, and that the increases continue and become irreversible. 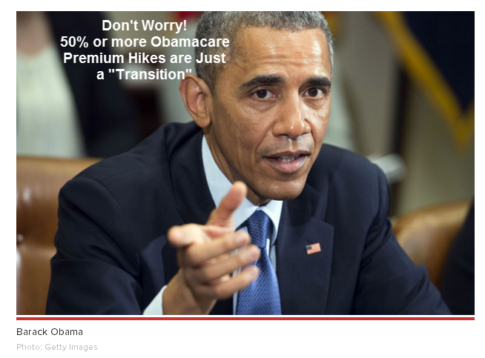 President Obama calls this a “transition” because insurers aggressively priced too low to get healthy people to sign up.

It’s a transition all right, to hell, for those watching rates skyrocket.

Meanwhile, young and healthy millennials have decided it is ridiculous to overpay for healthcare with $5,000 deductibles to support chronically ill smokers with cancer.

I have been writing about the Obamacare death spiral since the legislation first passed. Some are now just catching on.

Another day, another Democrat finally owning up to the fact that ObamaCare is a disaster. And another state facing the implosion of its health insurance market.

Minnesota Gov. Mark Dayton — once one of the Affordable Care Act’s most enthusiastic champions — is the latest Democrat to publicly eat crow for that support.

With good reason: Tens of thousands of Minnesotans are losing their coverage next year. And premiums on individual plans — which enroll 250,000 North Star State residents — will rise an average 50 percent to 67 percent.

“The reality is the Affordable Care Act is no longer affordable for increasing numbers of people,” Dayton admitted last week, calling the situation in his state “an emergency.”

This just a week after former President Bill Clinton blasted ObamaCare as “the craziest thing in the world,” adding that “it doesn’t make sense.”

An S&P Global Ratings forecast warns that, for the first time since ObamaCare got rolling, participation in the program will actually shrink by up to 8 percent.

Ever-higher premiums are keeping younger, healthier Americans — the ones whose premiums were supposed to subsidize insurance for everyone else — away in droves.

And what President Obama intended as his signature domestic achievement is well on the way to becoming his biggest failure.

Obamacare About to Collapse

ObamaCare is collapsing. Its utter failures become more obvious by the day.

We all remember the promises of ObamaCare, chief among them that the “Affordable Care Act” would lower health care costs. The opposite has occurred.

In his 2008 campaign for president, then-candidate Sen. Barack Obama repeatedly promised to cut annual health insurance premiums by $2,500. When he took office in 2009, annual family premiums for employer-provided coverage, the most common of private insurance coverage, cost $13,375 according to Kaiser. In 2016, those premiums are $18,142. That’s an increase of $4,767.

Back in 2010 just before ObamaCare became law, President Obama’s Department of Health and Human Services forecast there would be 24.8 million individuals in the exchanges by 2016. The actual figure at the end of 2016 according to Avalere Health will be 10.1 million.

Not only are premiums skyrocketing, but individuals are also left with fewer choices in the ObamaCare exchanges.

The dwindling number of ObamaCare supporters repeatedly point to the fact that 20 million more Americans have coverage now than before ObamaCare.

The vast majority of those 20 million, however, have been dropped into a failing Medicaid program. Patients under our broken Medicaid system struggle to find doctors who see Medicaid patients.

It is a top-down system that has Washington dictating terms to the states that ignore the diverse needs of communities across this country. That is not a recipe for success, and studies have shown that Medicaid’s impact on the health status of enrollees is negligible.

Regardless, 31 states expanded their Medicaid programs under Obamacare. However, it is not going as promised. According to Dr. Brian Blase at the Mercatus Center, there are 50 percent more enrollees at a cost of 50 percent more per person than originally projected. These massive, unanticipated costs will only become more unaffordable in the coming years.

Those governors and state legislatures that rejected the Medicaid expansion have been vindicated.

Hillary Clinton’s solution is to double down on ObamaCare with more government involvement in health care. She believes the fundamentals of the law are sound and it simply needs more taxpayer subsidies.

Her other scheme is to add a so-called “public option” plan even though we’ve already seen the disastrous ObamaCare co-op experience – the original compromise to a public option in the ACA.

Finally, as if ObamaCare’s total collapse is not imminent enough, Clinton also wants to add illegal immigrants to ObamaCare at the same time that America’s veterans aren’t getting the care they deserve.

One column is not nearly enough space to chronicle all of ObamaCare’s failures. Additional dishonorable mentions include the president’s illegal bailouts of big health insurance companies, as well as a finding by the Government Accountability Office that 100 percent of their investigators with fake documents were able to fraudulently enroll in ObamaCare.

April 15, 2016: Obamacare Death Spiral: Insurers to Drop Plans Unless Premiums Rocket, “Something’s Got to Give”

Anyone who did not see this coming is blind. 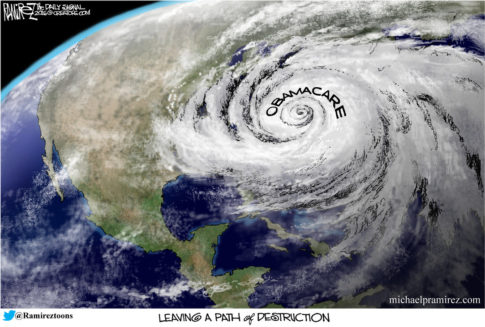