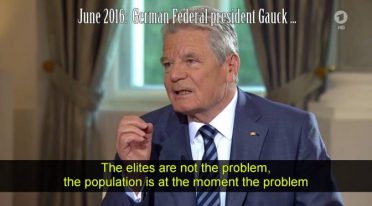 – GERMAN PRESIDENT hints he would like to see a Muslim replace him:

As he prepares to step down, citing his advancing years, Joachim Gauck hinted that he wanted a Muslim to succeed him.  Further pushing his arrogance to the limit, he condemned the newly-growing sense of German national identity and the danger of a disintegration of the EU, saying: “The elites are not the problem at all, the population is at the moment the problem.” 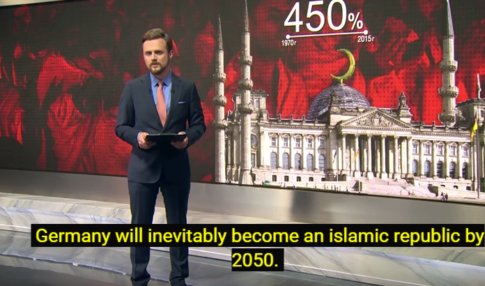 GERMANY’S president Joachim Gauck has hinted he could see a Muslim politician replacing him.

As he prepares to step down, citing his advancing years, Mr Gauck said: “I will not rule out for the future.”But the president hinted he wanted a Muslim to succeed him. The 76-year-old’s remarks are likely to create difficulties for the already embattled chancellor, Mrs Merkel, who is already facing an increasingly fractious debate over radical Islamism in Germany, sparked by her open door refugee policy.Echoing his concerns, an MP for Mrs Merkel’s coalition government said people “will put up the wall by force” to this decision.

Christian Democratic (CDU) MP, Klaus-Peter Willsch added: “That is not good for our country.”

Mr Gauck’s successor will not be decided by a direct vote, but by the political parties, along with a congress including sports people, celebrities and other public figures.

Vice-President of the EU Parliament, Alexander Graf Lambsdorff, said it would not be acceptable for the next German president to be ”a mullah with a Turban” but it is plausible for a “representative of modern, enlightened Islam” to be the next leader.

While, Social Democrats SPD leader Thomas Opperman added: “Whether a federal president is Christian, Muslim or Buddhist, it should not matter.

“It is crucial that the religion is not above the Constitution.”

But Germany has witnessed a dramatic changing attitude of the nation’s population towards the religion over the past year, which has seen the arrival of more than one million migrants.CDU MP Karl- Georg Wellmann described the plans as “totally absurd”He said: “That would not be appropriate in the current situation. This would only deepen the divisions in society. “Mr Gauck’s decision to step down has triggered a cross-party race for possible successors to be chosen less than six months before a 2017 General Election.