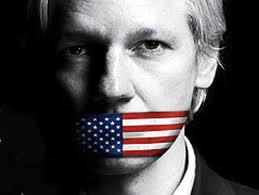 After months of exposing damaging internal information from both the Democratic National Committee and the Hillary Clinton campaign, much of which actually points to criminal behavior but seemingly has no impact on the polls, Julian Assange has concluded that “There is no US election. There is power consolidation. Rigged primary,
rigged media and rigged ‘pied piper’ candidate drive consolidation.”

There is no US election. There is power consolidation. Rigged primary, rigged media and rigged ‘pied piper’ candidate drive consolidation.

Sadly, it is difficult to disagree with the assessment.  That an establishment democratic candidate could endure an extended FBI investigation, in which multiple federal laws were clearly and intentionally broken, and clear evidence of corruption and collusion between the FBI and State Department is mind boggling.  Throw in evidence from WikiLeaks clearly linking the DNC to criminal efforts to incite violence at rallies, numerous examples of pay-to-play activities at the Clinton Foundation, blatant media collusion, etc, etc, and it
actually becomes quite frightening.

And, while no amount of corruption or scandal seems to sway an American electorate that is intent upon driving the bus off the cliff, Assange has promised a “surprise” for Tim Kaine and the “persecuted christian woman”, Donna Brazile.

We have a suprise in store for @TimKaine and @DonnaBrazile.

And while we certainly look forward to one more “October Surprise,” we’re sure it’s just one more damning piece of information that will be promptly ignored by the complicit “mainstream media”, which as Wikileaks itself exposed is nothing but a PR machine for the administration, and an oblivious American electorate.