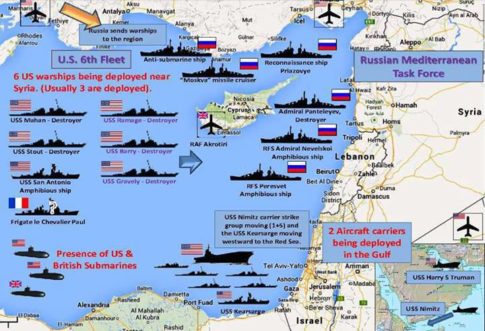 – Russia Is Deploying The Largest Naval Force Since The Cold War For Syria: NATO Diplomat:

Just moments ago we reported that in the latest escalation involving Syria, the Russian aircraft carrier Kuznetsov was now sailing past Norway on its way to Syria, where it is expected to arrive in just under 2 weeks.  As part of the carrier naval group, Russia also deployed an escort of seven other Russian ships, which we dubbed the “most powerful Russian naval task force to sail in northern Europe since 2014” according to Russia’s Nezavisimaya Gazeta daily reports.

It turns out it it was even bigger, because according to a NATO diplomat cited by Reuters, Russia is “deploying all of the Northern fleet and much of the Baltic fleet in the largest surface deployment since the end of the Cold War,” the diplomat said on condition of anonymity.

“This is not a friendly port call. In two weeks, we will see a crescendo of air attacks on Aleppo as part of Russia’s strategy to declare victory there,” the diplomat said.

An intensified air campaign in eastern Aleppo, where 275,000 people are trapped, would further worsen ties between Moscow and the West, according to the diplomat who added that “With this assault, it should be enough to allow a Russian exit strategy if Moscow believes Assad is now stable enough to survive.”

As we reported earlier, photos of the vessels have been released by the Norwegian military. A Norwegian newspaper quoted the head of the Norwegian military intelligence service saying the ships involved “will probably play a role in the deciding battle for Aleppo”.was more than this and as Reuters reported second ago, citing a NATO diplomat, Russia is in fact deploying the largest naval force since end of Cold War to reinforce its Syria campaign.  From Reuters:While there is little we can add to this that we did not just say in the previous post, we want to remind readers what the east Meditteranean looked like in the summer of 2013, when the first escalation between Russia and the US converted the sea off the Syrian coastline into a parking lot for warships.

In two weeks, it is about to get much busier.

9 thoughts on “Russia Is Deploying The Largest Naval Force Since The Cold War For Syria: NATO Diplomat”