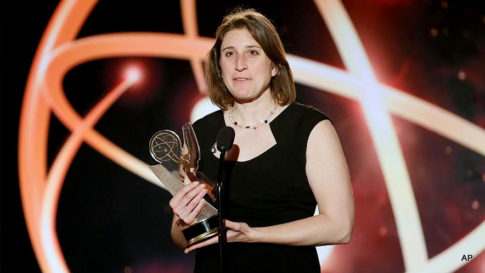 – ‘I Was Doing My Job’: Climate Reporter Facing 45 Years Speaks Out:

The filmmaker facing a lengthy prison sentence for documenting a nonviolent civil disobedience action last week has spoken out on behalf of journalism, the First Amendment, and the global climate movement.

“Journalism needs to be passionately and ethically pursued and defended if we are to remain a free democratic country.”
—Deia Schlosberg, filmmaker

“When I was arrested, I was doing my job,” Schlosberg said in a statement released Tuesday. “I was reporting. I was documenting. Journalism needs to be passionately and ethically pursued and defended if we are to remain a free democratic country. Freedom of the press, guaranteed by the First Amendment, is absolutely critical to maintaining an informed citizenry, without which, democracy is impossible.”

According to documentarian Josh Fox, whose new film Schlosberg produced,

She was held for 48 hours before being allowed to speak to a lawyer. The authorities confiscated her footage. She is now charged with three counts of felony conspiracy and faces a possible sentence of up to 45 years.

Saying she believes the charges “are unjust,” Schlosberg offered a passionate defense of independent journalism that’s covering the most important issues of our time:

I am a climate reporter; my specialty is following the story of how humankind is creating a grave problem for civilization by continuing to flood the atmosphere with greenhouse gases through the burning of fossil fuels and other industrial processes. I don’t think there is nearly enough reporting on climate change nor the movement of people around the world working to lessen the impacts of climate change.

It is the responsibility of journalists and reporters to document newsworthy events, and it is particularly important for independent media to tell the stories that mainstream media is not covering. The mainstream did not break the story on fracking nor did it break the story about what is happening at the Standing Rock reservation in North Dakota, nor the stories told in my most recent film with Josh Fox, How to Let Go of the World and Love All the Things Climate Can’t Change. Accordingly, I felt I had a duty to document the unprecedented #ShutItDown climate action, which stopped all Canadian oil sands from entering the United States. Canadian oil sands importation is a controversial issue that is not getting the coverage it warrants, especially considering that the extraction and use of oil sands has a profound impact on every person on this planet.

Schlosberg concluded by drawing attention to fellow videographers Lindsey Grayzel and Carl Davis, who were arrested in Washington state last week for filming the same action and also face preliminary felony charges. Grayzel toldReuters that her footage was also confiscated. “For reporters who are simply doing their job, which is their constitutionally protected right, to be facing such charges is an outrage,” she said.

On Monday, North Dakota dismissed riot charges against Democracy Now! journalist Amy Goodman. The development drew praise, though Reporters Without Borders noted that the charges “never should have been filed in the first place.”

Schlosberg also posted a short video on Facebook over the weekend, thanking people for their support and vowing to “say more in the coming days and weeks.” Watch below: