Back in 2010, Congress passed the Dodd-Frank Wall Street Reform and Consumer Protection Act which was intended to shut down proprietary trading desks at the big wall street banks while allowing them to hold just enough inventory to satisfy market making requirements.  Which is why many are now questioning how a 34-year-old Goldman Sach high-yield trader, Tom Malafronte, managed to make $100mm while maintaining compliance with federal banking regulations.  As a senior trader of Skyland Capital told the Wall Street Journal, “It goes against everything we’ve been seeing the last three years.”

The gains were the work of Tom Malafronte, a managing director on the bank’s high-yield-bond desk in New York. The 34-year-old trader bought billions of dollars in junk corporate debt on the cheap starting in January, then locked in profits as prices recovered, according to people familiar with the matter.

The windfall is a throwback to a previous era on Wall Street, when big banks were more eager to step in as markets turned and bond traders took bigger risks. Those bets have become less common since the crisis. Hoping to make the financial system safer, Congress passed rules that curbed banks’ ability to wager with their own money and required them to hold more capital.

Wall Street responded by shutting down its proprietary-trading desks and shrinking inventories of securities like bonds. The government allowed banks to continue trading securities in their capacity as market makers, serving as intermediaries between buyers and sellers. Regulators have said banks must show that the amount of bonds and other securities they hold on their balance sheets don’t exceed what they need to meet “reasonably expected near-term demand.”

Of course, high-yield has performed well so far this year but the whole point of the Dodd-Frank regulation was to explicitly restrict the big banks’ participation in both the upside and downside risk of big market moves. 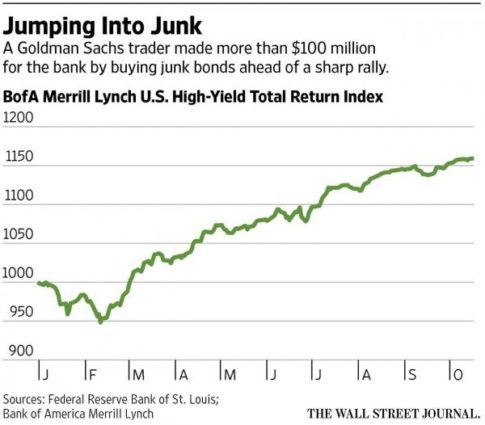 As the Wall Street Journal points out, Malafronte was able to amass $100mm in profits for Goldman in a matter of just 6 months trading high-yield issuances ranging from mining companies to Avon.  Apparently Malafronte went on a buying spree in January when high-yield prices dipped with sources telling the WSJ that he accounted for more than one-third of the daily trading volume of many issuances during that period.

“Tom is a tremendous risk taker,” said Jeff Bahl, who headed Goldman’s high-yield trading desk and worked with Mr. Malafronte before leaving to work with his father at Cincinnati money manager Bahl & Gaynor Investment Counsel. “In any opaque market, such as high-yield, the value of a skilled risk taker will always be there.”

Mr. Malafronte began by buying bonds issued by Freeport-McMoRan Inc. and Teck Resources Ltd. , two mining companies that endured debt-rating downgrades earlier this year. He also snapped up debt issued by retailer Toys “R” Us Inc., Gymboree Corp. and Avon Products Inc., along with a handful of other companies, as investors’ appetite for riskier securities nose-dived early in 2016, people familiar with the matter said. Concerns about an economic slowdown in China and the U.S., falling commodities prices and the uncertain direction of interest rates were roiling global markets.

On certain days in that period, Mr. Malafronte accounted for more than a third of all trading volume in some bonds, the people said.

Mr. Malafronte unloaded some bonds within a day of buying them as bond prices rebounded on higher oil prices and better economic data, the people said. In other instances, Goldman held the bonds for weeks. By the end of June, Mr. Malafronte had locked in profits of more than $100 million for Goldman over several months, the people said.

It is difficult—if not impossible—to define clearly the difference between trades made to meet clients’ demands and those conducted just to make money, said Hal Scott, a professor with Harvard Law School who has testified before Congress about efforts to regulate the banking industry.

“No one has been able to distinguish between market making and prop trading,” Mr. Scott said.

…though we would suggest that building a massive portfolio of high-yield bonds, sometimes representing one-third of daily volume, in response to a market dip feels like an attempt to place a wager a market rebound and not so much a concern for simply providing liquidity.  Somehow we suspect Elizabeth Warren could find this particular case to be quite interesting…or not, depending on the recent flow of political contributions.