While we have yet to get an update from Wikileaks on the status of Julian Assange’s internet connection at the Ecuadorian embassy in the UK, which as reported overnight was allegedly “severed” by an unknown “state party”, moments ago Russia’s RT (originally Russia Today), a television network and website funded by the Russian government, has allegedly seen its bank accounts blocked by the UK, according to a tweet posted moments ago by the station’s editor-in-chief, Margarita Simonyan.

“Our accounts in the UK have been closed. All Accounts. ‘The decision is not subject to revision’. Long live freedom of speech!” Simonyan said in a Twitter post, suggesting that the move stifles free speech.

According to RT, its The National Westminster Bank has informed RT UK that it will no longer have the broadcaster among its clients. “The bank provided no explanation for the decision.”

“We have recently undertaken a review of your banking arrangements with us and reached the conclusion that we will no longer provide these facilities,” NatWest said in a letter to RT’s London office. The bank said that the entire Royal Bank of Scotland Group, of which NatWest is part of, would refuse to service RT.

The letter said the decision was final and that it is “not prepared to enter into any discussion in relation to it.” 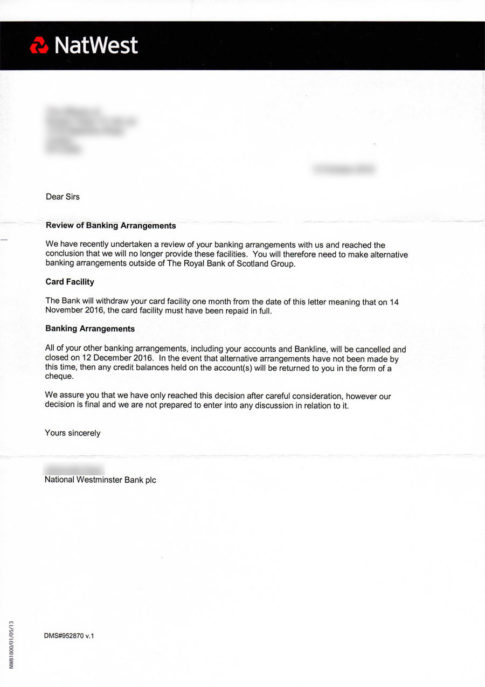 Commenting on the development, Russian Foreign Ministry spokesperson Maria Zakharova said it indicated that “Britain on its way out of the EU abandoned all its commitments to protect the freedom of speech.”

“I sincerely hope that there’s no political motive for this, because we know that the British government isn’t happy with RT in Britain,” publisher Marcus Papadopoulos told RT.

“RT has a lot of viewers in Britain. Many British people now tune in to RT to receive information on major topics around the world, including in Britain. And many British people believe that the alternative accounts that RT puts forward and covers are more truthful than what they’re hearing from, for example, Sky News. “If no bank in Britain would allow RT to be a customer, then that could spell the end of RT broadcasting in Britain, which would be a catastrophic event for freedom of speech in Britain,” he added.

The RT press office noted that
“This decision is incomprehensible, and without warning. It is however, not at odds with the countless measures that have been undertaken in the UK and Europe over the last few years to ostracize, shout down, or downright impede the work of RT. RT UK will continue its operations uninterrupted,” RT press office stated.

“It seems more than a coincidence that this has taken place at a time when the anti-Russian propaganda has been ramped up to unprecedented levels,” writer John Wight told RT. “This reflects the extent to which the West is losing the information war. RT plays a key role in challenging the narrative of the West and Western media when it comes to events in Ukraine, Syria and the Middle East.”