The latest document release by the FBI, which contains a further 100 pages of “302s” or summaries from interviews conducted with various parties close to Hillary’s private server, reveals a troubling fact: according to an interview conducted on June 6, 2016 with an unnamed employee working for a US defense contractor specializing in the areas of “missile, space and intelligence”, classified documents linked to Hillary Clinton’s private server were discovered in Romanian during a broader search for confirmation whether Clinton’s private server had been breached from the outside.

Specifically, the FBI specifically was trying to determine “if there was an intrusion into Clinton’s server and, if so, whether exfiltrated data fell into the hands of a foreign power.“

The probe was conducted after an unnamed woman who worked as a senior staff member in the US Senate Judiciary Committee contacted the witness and whom she asked if it was possible to determine if Clinton’s server had been compromised. Since the unnamed woman did not have the funding for the project, in August 2015 she met Newt Gingrich, who recommended she speak with a person at conservative watchdog site Judicial Watch. Judicial Watch then put $32,000 behind the effort in February or March of this year. The project entailed scouring the “deep web” for evidence that Clinton’s server, or that of her close confidante Sidney Blumenthal, was hacked.

What the probe found was disturbing, and contradicts the findings presented by FBI director James Comey.

The witness told the FBI that he reviewed the data and found files from Sidney Blumenthal’s server residing on a server in Romania. The witness further said that he believe Blumenthal had a personal server “because he found some of Blumental’s files on the server in Romania, but not any of Blumenthal’s emails. The Romanian server contained approximately 200 Microsoft Word, Excel, and other file types belonging to Blumenthal.”

As a reminder, it was the Romanian hacker Marcel Lazar, aka Guccifer, who first breached Blumenthal’s inbox in 2013 and exposed Clinton’s private email address for the first time, forcing her to change her username. Both Clinton’s allies, and FBI director James Comey have argued that hack did not compromise any of Clinton’s files. But, where things get troubling is that the alleged classified file found on a Romanian server did not come from Blumenthal’s server.

Specifically, the 302 notes that during the witness’ review of the data, he found “one sensitive Excel file listing the names of known or suspected jihadists in Libya”, and that a “portion of the file was in Russian.” The report notes that “the file did not come from Blumenthal’s server, but contained a reference to an IP address range that included the IP address of Clinton’s server.”

In other words, not only could Hillary’s home server have been hacked, but a file listing the names of jihadists in Libya may have found its way to an unsecured server in Romania.

And this is where something strange happened: “Upon viewing this file”, the unnamed witness “became concerned he had found a classified document and stopped the project.”

Considering that the FBI had expressly concluded that there was no evidence that Hillary’s home server had been hacked by outside forces, and that this particular confidential document was found on a Romanian server but did not originate from Blumenthal’s server, the other distinct possibility is that it came from Hillary’s server. Which is why we wonder why the FBI quickly squashed the project at this moment, before following up with Hillary or her staff to determine if her server was the source of the confidential file found half a way around the world.

What makes this discovery even more surprising is that as readers will recall, during an NBC interview in May, the Romanian hacker Guccifer claimed that in addition to hacking Blumenthal, he also gained access to Hillary Clinton’s  “completely unsecured” server. “It was like an open orchid on the Internet,” Lazar told NBC News. “There were hundreds of folders.” What was confusing, however, is that in subsequent questioning with the FBI, he then recanted and said he had lied about hacking Clinton’s server. Just as surprisingly, last week Lazar was quietly sent back to Romania where he will remain for the duration of his 52 month sentence.

The section in question: 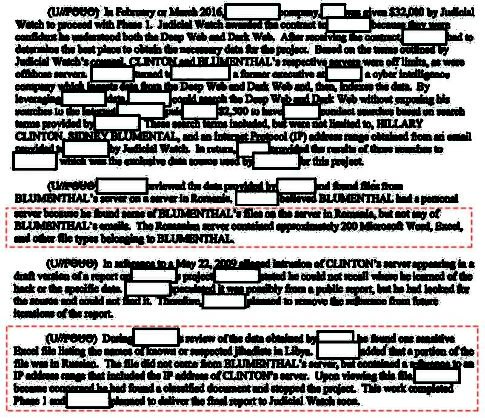