The revelation about the Leave campaigner reignites claims he has put his own ambitions ahead of the country’s best interests.

Boris Johnson has defended writing an article in favour of staying in the EU just days before backing Brexit.

The Foreign Secretary, who penned the unpublished pro-Remain article just two days before revealing he would be campaigning to break from Brussels, said he had been trying to “make an alternative case” to himself.

However, when he compared the arguments “it was blindingly obvious” which side to support.

The revelation has reignited accusations that Mr Johnson had put his own political ambitions head of the country’s best interests.

In the previously-unseen column for the Daily Telegraph, Mr Johnson said remaining in the bloc would be a “boon for the world and for Europe”.

He also warned Brexit would cause an “economic shock” and could lead to the “break up” of the UK.

In the wake of the June vote, the pound has plummeted to record lows while Scotland’s First Minister Nicola Sturgeon has drawn up plans for a second independence referendum if Britain leaves the single market.

But following the publication of his pro-EU article in a new book and The Sunday Times, Mr Johnson said: “It is perfectly true that back in February I was wrestling with it like a lot of people in this country and wrote a long piece which came down overwhelmingly in favour of leaving.

“I then thought I had better see if I could try and make an alternative case to myself so I wrote a kind of semi-parodic article in the opposite sense, which has mysteriously found its way into the paper this morning because I think I might have sent to a friend.

“I set them side by side and it was blindingly obvious what the right thing to do was.

“I think the people made the right decision.”

But Ms Sturgeon said: “I think Boris Johnson was making a calculation that was about his political interests, not about the interests of the country.”

Mr Johnson recently signalled his support for a so-called “hard Brexit” when he argued the UK could get a trade deal “of greater value” to the economy than access to the EU single market.

However, in his pro-Remain article, revealed in the book All Out War, by The Sunday Times’ political editor Tim Shipman, Mr Johnson highlighted the benefits of the free trade zone.

He said: “This is a market on our doorstep, ready for further exploitation by British firms.

“The membership fee seems rather small for all that access.

“Why are we so determined to turn our back on it?”

While he described the renegotiated deal struck by David Cameron with Brussels as “a bit of a dud”, he said there were parts of the agreement, such as getting the UK out of ever-closer union, which would be “very powerful” once signed off in a treaty.

As a result, he said: “I am going to muffle my disappointment and back the prime minister.”

However, just two days later he shocked Mr Cameron in declaring his support for the Leave camp. 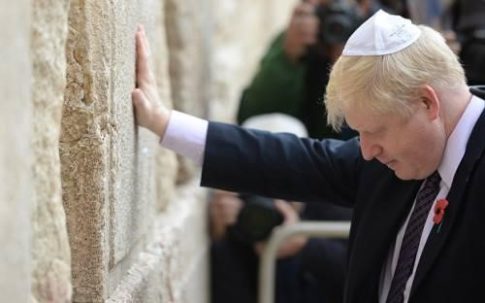