– EU Exit “Only Way Out” From Greece’s “Occupying Force” Of Refugees:

What does an occupation army do when it is installed in a country? It occupies the land, forcing residents to follow its own way of life. It implements measures against the country’s inhabitants, it propagandizes its beliefs and uses force to have them imposed.

This, sadly, is what has been happening in Greece from the migrants who seem to “forget” that they are hosted in Greece and force the Greeks to feel like guests in their own country.

If someone is a war refugee or his life is in danger in his homeland, it would seem appropriate, when he arrives in the country which offers him asylum, to be grateful to this country, respect its history, its people its values and its laws. The same would hold true for an immigrant who wants to go to a country where he hopes he will find a better future.

In Greece, conversely, illegal immigrants — all of whom the media call “refugees,” apparently trying artificially to legalize them in the moral consciousness of citizens — have been occupying spaces that do not belong to them, using violence, blocking roads, committing crimes against public property, acting aggressively toward residents and the police, and saying that they feel offended when they see symbols that represent Christianity. The guests seem to be trying to take over the house.

A few weeks ago, 200 North Africans and Pakistanis rioted in the middle of the night, demanding to leave Mytilene Island. They were chanting, “Jihad! Jihad!”, smashing the residents’ cars in the center of the island and disrupting the local community. The migrants claimed that someone told them about the death of seven migrants on a ship, so they rose up against the authorities. The police and NGO workers explained that this was misinformation, but the 200 migrants were evidently not interested in hearing that. The migrants were ready to wage jihad because they believed a rumor about an event for which, even had it been true, the Greek state and its inhabitants had no responsibility. The authorities were unsuccessful at calming them down and trying to make them return to their living area.

As it turned out, there were no dead migrants; the uprising was a “mistake,” but the police and the locals had to spend the night tracking down refugees and migrants on the streets of Mytilene.

The illegal immigrants stated that the information about the seven dead migrants came through phone calls to them during the night. Police sources say, off the record, that this incident has all the hallmarks of covert “black operations.”

A few days later, on September 19, 2016, on Mytilene Island again, there was a new eruption from migrants in the Moria district. This time, the information the migrants heard, which again turned out to be false, was that they were about to be returned to Turkey. Immediately they set fire to 16 acres of olive trees, as well as to the camp in which they were living.

Now 300 migrants, who had earlier escaped from their camp and tried to protest in the center of the island, were burning everything in the camp and the area around it, until the police stopped them and made them to return to the camp, where again they tried to burn everything.

Residents saw their groves of olive trees turn to cinders as well as much of the migrant camp, three shipping containers, clothing and footwear.

Some of the illegal immigrants were taking selfies during the burning and chanting, “Allahu Akbar” [“Allah is the Greatest”].

The Port of Mytilene Island was turned into a battlefield, where migrants and many Greek “leftists” tried to prevent the military contingent from lowering the Greek flag in front of the town’s old port. Many Greeks hate the national flag. They appear to prefer multinational states without any references to the state’s national foundations. They were chanting slogans and provoking both the military contingent and the people of Mytilene Island, who watched amazed from the opposite side of the road. It was a demonstration of power from behalf of “leftists” and illegal immigrants. Many citizens of Mytilene Island evidently could not stand to see the illegal immigrants and other Greeks provoke them and try to halt the lowering of the flag. So some citizens moved aggressively against them and engaged them in street fights.

Every Sunday morning on Mytilene Island, soldiers hoist the flag and in the evening, an hour before sunset, soldiers lower the flag. A week after this incident, thousands of Greeks gathered around the soldiers and the flag in Mytilene Port and were singing Greek National Anthem, showing their faith and honoring the national symbol. People are scared. They are gathering around the flag and the Army apparently because they feel they are losing their homeland and their sovereignty to the thousands illegal immigrants who have occupied their island.

On September 26, 2016, in the Tympaki region of the island of Crete, people found all over the streets quotes from the Quran. The text, signed by the “Muslim Brotherhood of Crete Island”, stated among other things:

On the same day, September 26, in the Asprovalta region near the city of Thessaloniki, a 49-year-old man from France who came to Greece through Turkey was followed by police officers because he was suspected of being a jihadist. The moment he saw the police car, he rammed it, while chanting “Allahu Akbar”. [Allah is the greatest”] The attacker was arrested and the district attorney ordered his deportation.

A month ago, the inhabitants of Vavilon, a small village in Chios, another island that received a large number of illegal immigrants, decided to take the law into their hands, because, it seems, the state was not protecting them. The residents set up a militia to protect their families and their property from illegal immigrants. Within a week, they had recorded more than ten burglaries and vast property damage.

The media covers these disruptions only when they are like earthquakes, when one large one causes major disasters; the small ones are evidently not interesting. The same indifference of the media can also be seen regarding daily problems caused by the illegal immigrants. The media covers drug trafficking, conflicts between migrants of different Islamic doctrines, rebellions in migrant shelters, conflicts between countries and races, and underage boys and girls being raped. On September 24, in the Moria area of Mytilene Island, four 17-year-old migrants from Pakistan raped an underage Pakistani migrant, age 16, and recorded the rape with their phones. The police arrested the perpetrators, who had been blackmailing the boy before they raped him.

Illegal immigrants have also been blocking roads in many cities; halting traffic for hours. They occupy the roads whenever they feel like it; the police do not stop them and there are no arrests.

The Greek government has been friendly to the migrants. Illegal immigrants have, in an apparent demonstration of power, been asking Greek drivers to show their IDs and driver’s licenses. They have established checkpoints as an occupation army does. The government and the police did nothing to stop them. People showed their documents because of the great numbers of migrants; the drivers were evidently scared for their lives and their cars, and did not want things to get nasty. If you consider that the police were just watching all this passively, the drivers did not have much choice.

Another day, illegal immigrants blocked a road because they apparently did not have a good enough internet connection in the “refugee shelter.”

How would Americans feel if Muslim illegal immigrants living in America said that they were offended by the Statue of Liberty because she was not wearing a burqa?

The Archbishop of Athens and All Greece, Hieronymus, last March removed his cross, the symbol of Christianity, from his vestments during his visit to the Port of Piraeus, in order, he said, not to “offend” the Muslim migrants. 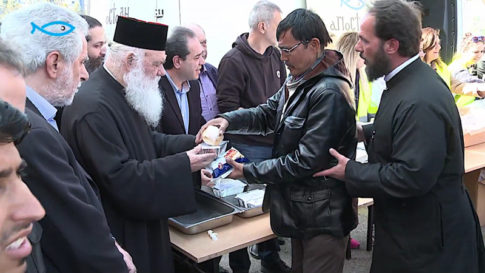 Archbishop Hieronymus of Athens and All Greece is pictured distributing food to migrants at the Port of Piraeus. The Archbishop removed his cross from his vestments during the visit to Piraeus, in order, he said, not to “offend” the Muslim migrants. (Image source: HellasNewsTv video screenshot)

Who warned him that Muslim migrants would be offended by his cross? What would they do if the Archbishop visited them while wearing his cross? Would they kill him? Would they burn the city of Piraeus? They would wage jihad against the Greek people?

Why are we hiding the symbols of our faith from people who come illegally and uninvited into our countries? What power could make an Archbishop remove the symbol of his faith, apart from a country’s political power?

The problem in Greece is not only the government or the mismanagement of illegal immigration. All traditional mainstream political parties in Greece, directly or indirectly, have been encouraging illegal immigration and the transfer of huge Muslim populations into Greek society. They obey the self-destructive EU policies on immigration that could eventually cause the end of the Hellenic-Judeo-Christian values of Europe, such as individual freedom, critical thinking and dispassionate inquiry.

We Greeks have already been crushed by Islam, by the twentieth century genocide in Turkey — that even now targets anyone not Muslim such as Christians, Alevis and Kurds — and the more recent Turkish occupation of Cyprus, again with the world’s complicity.

In spite of that, the mainstream political parties clearly do not care about protecting the nation, its identity or the safety of its citizens.

The establishment in Greece is a miniature of the American establishment: politicians and institutions of government corrupted to the bones, mainstream media and oligarchical fans of globalization. Greece is, in fact, being paid 198 million euros for the refugees.

The Greek establishment suffers from the same symptoms as Western European and American regimes. They no longer believe in the foundations of the Republic: “Vox Populi, Vox Dei”: the voice of the people is the voice of God.

That is their solution to the migration crisis and Greece’s economic meltdown, from failed authoritarian policies of the unelected, unaccountable and untransparent EU. What is happening in Greece, as in much of Europe, is actually a massive replacement of its population, values and way of life. There is only one way now to save what is left of Greece: The British way. Exit. Now.