Yesterday, President Obama commuted the sentences of another 102 inmates, most of whom were serving time for drug-related offenses.  According to The Hill, the additional 102 commutations brings Obama’s total to 744 over the course of his presidency, more than the past 11 presidents combined, and brings his 2016 total to 590, more than any single year in U.S. history.

And, of course, the White House continued to brag about the record-breaking commutations on twitter.

“These statistics make clear that the president and his administration have succeeded in efforts to reinvigorate the clemency process,” White House counsel Neil Eggleston wrote in a blog post. “Beyond the statistics, though, are stories of individuals who have overcome the longest of odds to earn this second chance.”

BREAKING: @POTUS just commuted the sentences of 102 people, bringing the total to more than the past 11 presidents combined. pic.twitter.com/734VSwYzsS

The following chart from Pardon Power helps to put the scale of commutations under the Obama administration into perspective. 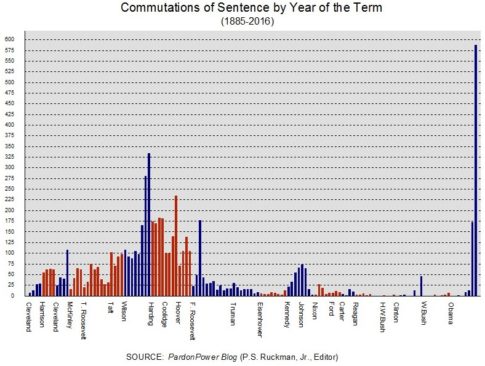 Meanwhile, with just 3 months left in office, The Hill points out that Obama is accelerating the use of his clemency power.

With just three months left in office, Obama is accelerating the use of his clemency power. Obama in August handed out commutations to 325 inmates — including 214 on Aug. 3, the largest single-day total since 1900.

That alone nearly doubled the number of commutations granted during Obama’s presidency.

Obama first launched a clemency initiative in 2014 to review sentences of non-violent drug offenders who would receive shorter prison terms under today’s guidelines.

It’s part of the president’s broader push to reform the criminal justice system.

Facing pressure from reform advocates to pick up the pace of commutations, the administration has tweaked its strategy to accommodate more inmates.

He has shortened some inmates’ sentences without immediately releasing them, leaving them years left to serve. That has allowed Obama to grant commutations to prisoners who have committed more serious offenses.