While the latest alleged hack by Guccifer 2.0 of what was supposed to be the Clinton Foundation ended up being a dud and was merely a data dump of mundane documents obtained from from the Democratic party of Virginia and the Democratic Congressional Campaign Committee, moments ago another hacking entity, one that has also been allegedly linked to the Russian government – the anonymously-operated DCLeaks which was responsible for the massive Soros Foundation hack several weeks ago – has just released thousands of emails taken from the personal account of Capricia Marshall, a long-time Clinton friend who worked for many years under Hillary at the State Department.

Per the DCleaks profile of Marshall, “the former Chief of Protocol of the United States, Capricia Marshall used to be one of the Hillary Clinton’s insiders at the State Department. The daughter of immigrants, she worked on the Bill Clinton presidential campaign. In 2000, as the Clinton Administration wound down, Marshall worked on Hillary Clinton’s New York Senate campaign, although in its aftermath her name figured in charges of campaign finance violations brought before the Federal Election Commission. Capricia Marshall is increasingly at Clinton’s side these days. It is not by accident that Mrs. Marshall is on “Washington Power List”.

Her departure from the state department was chronicled by the Washington Post in May of 2013:

Capricia Marshall, one of the last of the Hillary Clinton insiders at the State Department, is giving up her role as Chief of Protocol. There’s no official announcement yet, but Marshall has informed the White House and Secretary John Kerry of her decision to leave at the end of the summer. “There’s nothing I didn’t love about this job,” she told us Monday, fresh off a trip to Mexico and Costa Rica with President Obama. “I’m going to miss this a lot.”

Ambassador Marshall — yes, a job that typically goes to close presidential pals comes with a fancy title — survived a long confirmation process and became the most visible link between State’s tight-knit group of Clinton loyalists and the Obama White House.

Marshall was “someone closely associated with Hillary Clinton who [Obama insiders] were wary of — and who they came to love and didn’t want to lose,” said Philippe Reines, another member of Clinton’s posse.

The first-generation American (half Mexican, half Croatian), 48, has been at Clinton’s side for two decades: First as a personal assistant, then White House Social Secretary, and advisor on two Senate and the 2008 presidential campaigns. Her role at State was to oversee top-level visits here and abroad: State dinners (including the one where she famously slipped on the North Portico and gracefully rebounded while greeting Mexico’s president), travelling on every overseas trip with the president (and on Clinton’s bigger trips), and micro-managing the finer points of international diplomacy — escorting dozens of ambassadors on trips around the U.S., showing up at every embassy’s national celebrations here in D.C.

Obama asked her to stay on after Clinton left, but with three years of constantly travelling, she’s decided on her own Marshall Plan: More time with her husband and 13-year-old son. “There was a clear need for mom to focus on her son,” she said.

What is more important is that unlike the latest batch of Guccifer emails, these appear to be authentic.  The thousands of emails released on DCleaks were lumped into eight different categories:

The link to the DCleaks site can be found here. 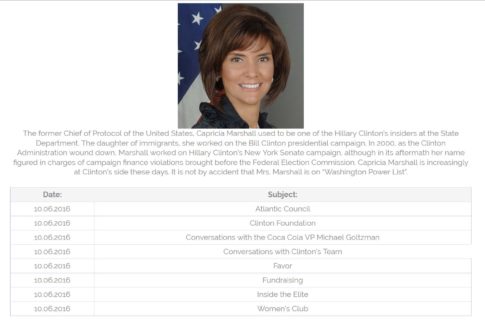 While we are going through the data dump, we will point out that the team at Daily Caller appears to have uncovere what appears to be Hillary Clinton’s new email address.

As the Caller first reported, among the many emails released were exchanges between longtime Clinton friend Capricia Marshall and someone using the address hdr29@hrcoffice.com.

That someone appears to be Hillary Clinton.

Dear All–
Now that our No Ceilings roll out has finished, I wanted to thank you, and through you, the entire team that did the work to support us in producing a world class report, plan and event.
I could not be happier or prouder. Please get some rest–you’ve earned it!
Onward—H

The email was sent to Marshall and several other Clinton insiders.

While it has been known that Clinton was using a different personal email address than the one she used as secretary of state, the leaked emails are the first to reveal what that address is. As Chuck Ross at DC points out, “as secretary of state she emailed with the address HDR22@clintonemail.com. After that address was exposed in a hack by Romanian hacker Guccifer, she changed the address to HROD17@clintonemail.com.”

In another email, this one from June 20, 2015, Clinton appeared to help her niece, Megan Rodham, obtain a passport.

“Hi, Hannah,” she wrote to aide Hannah Richert. “I just talked to Megan who told me she got to the airport and couldn’t go w Tony and the kids because her passport had expired last week and they had to go w/o her,” the email continues, apparently referring to Clinton’s brother, Tony Rodham.

“She told me you’re trying to get her a new one asap. I’m copying Huma and Capricia to see if they can help too.”

Richert responded that Rodham was “all set.” Clinton thanked her for the help.

A third email forwarded to Hillary, and originated by Erick Mullen, a PR agent at Mercury, lays out the author’s observations on “Dangerous Donald” 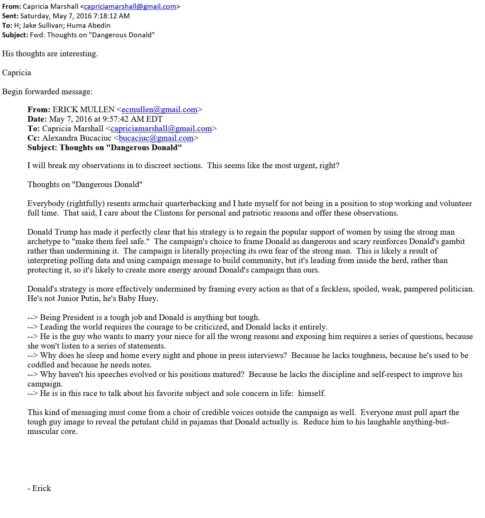 More as we get it, which may take a while as it appears the DCleaks site is being bombarded at this moment.