– US Manufacturing Crashes Into Contraction In August, Election Uncertainty Blamed

– Trump Returns To Form With Fiery Immigration Speech, Vowing “We Will Build A Great Wall, Mexico Will Pay For It”:

Just hours after delivering subdued comments and striking a conciliatory tone alongside Mexico’s president, Donald Trump returned to form in his fiery immigration speech (full text here) in Phoenix last night, which laid out the presidential candidate’s immigration plan which definitively ruled out legal status for undocumented immigrants and once again promised to build a wall on the southern border of the U.S., saying he would force Mexico to cover the cost. “We will build a great wall,” Trump said to loud cheers “And Mexico will pay for the wall. One hundred percent. They don’t know it yet, but they’re going to pay for it.”

Trump lays out immigration plan. No. 1: “We will build a great wall along the southern border…and Mexico will pay” https://t.co/In8NY0SLwz

The rally was at a convention center in downtown Phoenix. Trump’s warm-up speakers including Arizona Governor Doug Ducey; Joe Arpaio, the sheriff of an Arizona county who has become a symbol of the anti-illegal-immigration movement; former New York City Mayor Rudy Giuliani; and Trump’s running mate, Mike Pence. At various points in the speech, the crowd broke into chants of “build the wall!”

Read moreTrump Returns To Form With Fiery Immigration Speech, Vowing “We Will Build A Great Wall, Mexico Will Pay For It”

Hurtling toward a massive financial crisis.

Forty-five years and counting: We’ve been on a debt spree since the early 1970s when we went off the gold standard, covering every possible angle. Trade deficits, government deficits, unfunded entitlements, private debt – you name it! Our total debt has grown 2.5-times GDP since 1971.

How could economists not see this as a problem? How is this the least bit sustainable?

It isn’t. We’re hurtling toward a massive financial crisis, and all we have to show for it are financial asset bubbles destined to burst. And when they do, they’ll wipe out the artificial wealth they’ve created for many decades… in just a few years, as they did from late 1929 into late 1932!

The chart below shows the common-sense truth.

“Looks like the US as a killing/shooting/bullying nation, are also taking out on the homeground. 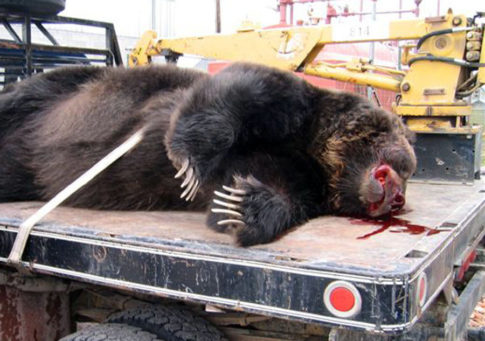 Today, thousands of people are gathered in Yellowstone to celebrate the centennial birthday of the National Parks, which many say is perhaps the best idea that America has ever had.  But no one is in Gardiner, Montana, today to mourn the dead. And indeed, most do not know of the catastrophe that hit the grizzly bear, one of the Park’s most beloved icons, in 2015, when 85 bears died out a population of perhaps 717 animals.

Last week, government data was released showing that bear deaths during 2015 shattered previous records, and that thresholds for allowable female deaths were exceeded by a large margin (link). The death toll of 85 grizzlies is not an anomaly, but rather the most recent manifestation of a decade of unsustainable high grizzly bear mortality.

On 29 Aug 2016, a strong summer storm hit the city of Colorado Springs, Colorado.People had to be rescued from cars and heaps of hail had to be removed with snowplows.

– Mongolian officials tell farmers to harvest now – “It may get cold earlier than usual”:

A risk of frost affecting harvesting of wheat and vegetables.

24 Aug 2016 – The Mongolian government on Wednesday appealed to members of the public and students to actively help in the harvest because “it may get cold earlier than usual.”

The Food, Agriculture and Light Industry Ministry encouraged agricultural farms and businesses to hire students and youth to harvest crops as soon as possible.

Mongolia is about to harvest wheat and vegetables from 491,200 hectares of land.

Not just August, but the rainiest of ANY month on record

As of August 25th Moscow had already set the record for the rainiest month in the city’s history of meteorological observations.

According to the Moscow Meteo-Bureau, the city had received about 170 mm (6.69 inches) of rainfall the first 25 days of the month.

“The previous monthly record was set in August 1973 when 163 mm of rainfall was recorded”, a bureau spokesman said.