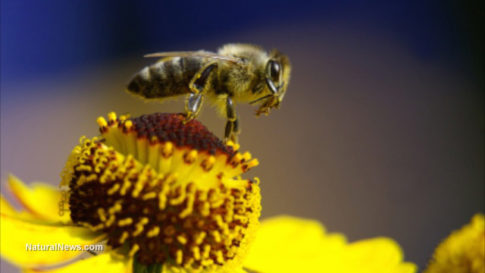 Okay, maybe Monsanto didn’t actually set out to kill off the honeybees, but they’re doing a darn good job of it, if you ask me – and threatening the lives of the rest of us humans, as well.

And their recent tactics have included a clever propaganda campaign designed to paint a kinder, gentler picture of their devilish operations, but it’s just a thin veneer concealing a whole lot of ugly.

Not only that, but their efforts to pretend that they are actually trying to help the honeybees might unleash another Pandora’s box of reckless nature-meddling technology that could lead to even more disastrous consequences for the environment, the bees and everyone else.

I’m not sure if someone at Monsanto managed to bribe the staff of WIRED, but a recent article published by the online magazine seems to be nothing more than an apology piece written to make the company somehow appear more human.

However, the article, entitled A Swarm of Controversy – In Their Struggle for Survival Against Killer Mites, Bees Get An Unlikely Ally: Monsanto, actually reveals some disturbing facts about a new experimental technology the company is developing, while also avoiding any discussion about glyphosate and its deadly effects on honeybees.

It’s as slanted a piece of journalism as I have ever come across, but even though it’s obviously nothing more than pro-Monsanto propaganda, it contains some very interesting information.

The article’s main focus is honeybee expert Jerry Hayes, who for the past five years has worked for Monsanto as a sort of public relations figure whose job is to explain to beekeepers the company’s program involving genetically-altered RNA (ribonucleic acid) that in theory will control the varroa mite – one of the many threats currently facing honeybee populations.

The technology – which is still in development and which has so far failed in several field trials – involves altering strands of RNA (single-stranded chains of cells similar to DNA that process proteins and carry genetic information) to give it the ability to kill the predator mites.

The process is called RNA interference, or RNAi, which theoretically allows altered RNA to zero in on specific organisms, such as the varroa mite.

From the WIRED article:

“Traditional pesticides act like chemical backhoes, killing their targets (beetles, weeds, viruses) but harming good things along the way (beneficial insects, birds, fish, humans). RNAi, in theory, works instead like a set of tweezers, plucking its victims with exquisite specificity by clicking into sequences of genetic code unique to that organism.”

That may sound nice, but there are a number of possibly serious risks and unknowns associated with unleashing such a technology – but hey, that never stopped Monsanto before, did it?

Monsanto’s mantra has always been: “If it makes money, let’s try it out – no matter how dangerous it might turn out to be!”

National Honey Bee Advisory Board: Unleashing RNAi technology ‘would be more naive than our use of DDT’

In fact, even the Monsanto-praising WIRED article acknowledges that this technology could pose a serious threat:

“Lots of very different living things share genes and genetic sequences, which means it is theoretically possible, if unlikely, that RNAi could harm organisms beyond its targets. …

“In comments submitted to the USDA, the National Honey Bee Advisory Board argued that using the technology ‘would be more naive than our use of DDT in the 1950s.'”

And who was one of the first manufacturers of DDT – which causes liver, reproductive and nervous system damage?

Aside from revealing some of the the details regarding this unproven and potentially disastrous new Monsanto technology, the WIRED article conveniently skirts the issue of glyphosate, its bee-killing properties and its likely significant contribution to Colony Collapse Disorder (CCD), by shifting the blame to neonicotinoid pesticides:

“[Hayes] knew that environmentalists linked colony collapse to neonicotinoid insecticides and that they thought Monsanto was somehow to blame. But he also knew that Monsanto doesn’t make insecticides. The company’s most famous product, glyphosate—that’s Roundup—kills plants.”

But glyphosate also kills bees – it’s a scientifically-proven fact – and the article makes absolutely no mention of that fact.

And so it appears that the publishers of WIRED have either sold out to Monsanto – like so many scientists, politicians and regulators have already done – or they are just plain stupid.

Knowingly or not, WIRED has become just another Monsanto shill. …