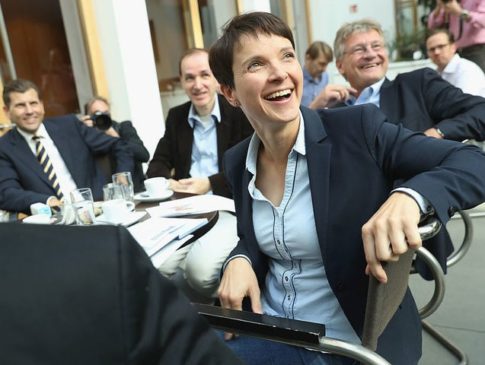 The anti-mass migration Alternative for Germany (AfD) have polled the highest numbers nationally in their history cementing their place as the third largest party in Germany.

The party is becoming an even more potent threat to the establishment parties as they now hit 16 percent in the polls. The polls come after another huge regional victory in the Berlin elections last weekend that saw the party poll over 14 per cent in the traditionally left wing capital Bild reports.

The support for the AfD has largely come at the expense of German Chancellor Angela Merkel’s Christian Democratic Union (CDU) who have lost support in every regional election this year. In Berlin, the CDU had their worst result in their history polling below 20 percent for the first time ever.

The poll, conducted by German broadcaster ARD, shows that the AfD are steadily gaining momentum nationally as they have increased their polling numbers from a poll conducted earlier in the month before the Berlin elections.

The poll shows that the German people are no longer fully supportive of the migrant policies of Chancellor Merkel and that her continued course has hurt her party. Merkel admitted that she had been wrong on the migrant issue shortly after the results of the Berlin election were finalized and said that she was now open to hearing suggestions from allies to improve the migrant situation in Germany.

Many Germans, according to the poll, want a new version of the current coalition. 33 per cent of those surveyed wanted the same coalition of the Christian Democratic Union (CDU), the Christian Social Union (CSU) and the Social Democrats (SPD), but a rising number, 25 per cent,  are more supportive of the idea of a left wing government without Merkel. A further 13 percent showed interest in a coalition government of the CDU, CSU and AfD, also likely without Ms. Merkel at the helm.

The AfD are known to be the toughest party in Germany on the key issues of mass migration and Islamisation. Many parties like the Bavarian CSU have attempted to emulate some of the policies of the AfD after seeing the electoral success the young party has had. Earlier this month the CSU said they wanted to see a cap on migrants and they want to see prioritization for Christian migrants and those coming from pro-western societies.

The ultimate test for Chancellor Merkel and the German political establishment will be next years federal election, though the majority of German citizens have expressed an unwillingness to support Merkel for another term as Chancellor.