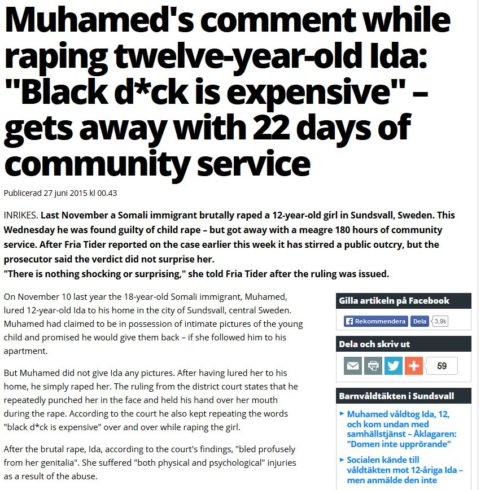 After the verdict was issued against the Somali rapist, however, Ida and her family, who have a Jewish background, continued to be harassed by the rapist’s friends – a 16 year old Somali and his 18-year-old brother and mother – which Sundsvall Tidning reported on back in April. All three have restraining orders against the girl, but the Somalis continue to escape indictment, again and again .

Since local authorities refuse to do anything about the situation, the family has now been forced to flee to Norway to seek refuge, the father told us.

The dropped charges include assault, sexual assault (for example, the Somalis flashed their genitals to the girl) and breach of restraining orders. The Muslim men also called Ida a “whore”, beat her and threatened to kill her brother, according to the girl’s father. One of the most staggering cases of assault occurred on Holy Thursday this year at a bus stop.

“Ida was on her way home from school by bus, and the Somali brothers stepped out together with their mother. As soon as Ida left the bus they started chasing and beating her. One of the brothers knocked her in the back of her head and the other one hit her on her mouth and smashed her teeth. Their mother stood back and watched, and at the end she herself kicked the girl with her foot,” Ida’s father told Free Times.

The case attracted the attention of Sundsvall Tidning, a local newspaper that also published a picture of the girl’s injuries. Moreover, there was a note from the hospital that described the damage the girl suffered. However, prosecutor Jens Göransson chose to discontinue the crime investigation.

When the Free Times first reached Göransson, he told us that he had no recollection of the case. When we reminded him that he had actually dropped the charges altogether, he said he could not remember why he had done so and explained that he was in the middle of a trial.

When we told him what had happened Göransson replied that he had no idea why the charges had been droppad. “It probably had to do with some issues regarding the evidence. I have no idea right now why that case was closed,” Göransson said.

He had no comments regarding the documentation of the girl’s injuries or any other information about the beating. “No, I cannot answer that. They’re shouting at me now, I have to get back into the courtroom again. I have to finish. Try to reach me again at the end of the week,” he said.

When we caught up with Jens Göransson later, he stated that there was simply not enough evidence for the case to go to trial. “Except for the plaintiff, several other witnesses have been heard and it was simply impossible to prove exactly how this had happened. While it is clear that the girl had been injured, if I remember correctly, perhaps she had done things too and the order in which this happened has been impossible to review.

Secondly, you have to be able to demonstrate who has done what and at what stage. If two people, for example, engage in a fight with each other, both will of course not be convicted of assault. Rather, none of them will be convicted,” Göransson told us.

So this 13-year-old girl. Do you think she abused these two men? “I don’t know if she had abused them or if they all had engaged in the fight. I don’t remember which was what in this case.”

Meanwhile, Jens Göransson has indicted Ida’s father for having assaulted a daughter in one of the Somali families. Both Ida’s rapist and the 16-year-old are among the witnesses in the criminal investigation, while an independent witness told police it was actually the father’s young son who beat the girl. According to Göransson, however, there is “sufficient proof” of the crime.

The latest incident against the 13-year-old girl took place on August, 25. Ida and her father were at a bus stop at 11 PM when a blue Mercedes van stopped in front of them. Three masked Somalis stepped out of the van and tried to drag her into the vehicle, according to the girl’s father. “I hit two of them and then they ran away,” he said.

Ida’s family is poor. Both parents are unemployed and the family has not been able to move from Sundsvall to a safer place to escape the regular harassment and violence from the Muslim group.

After the rape, Ida was away from school for an extended period of time. At this point, the social services suddenly developed an interest in the family and held a meeting with Ida and her mother concerning the school absence.

According to Sundsvalls Tidning, the social services refused to notify the police when the girl was raped last year, even though they found out about the case right away, but chose to wait for five months. But now, the social workers suddenly were very eager to forcebly apprehend Ida and put her in a foster home in order for her to be able to “go to school”.

Ida, according to the social services, had to get away from the “risk environment” that the Muslim neighborhood in Sundsvall constituted.

The plans, however, were averted when the mother assured the social workers that she would take Ida out of Sundsvall. “Taking into account that [Ida], despite high absenteeism, still has been more in the school this year than she did in the past, the social services believes that the current situation is not such that interventions under [the Act on the Care of the Young] can be applied,” the agency stated.

Ida spent the summer in Denmark and the 13-year-old has now been forced to flee to Norway, where the family hopes to get the protection that the Swedish authorities can not give her.

“If we cannot stay in Norway we will go to France. At any case, we will not stay in Sweden. In Sweden, the authorities only care about Muslims,” the father told us.

1 thought on ““You f*cking whore!” Jewish girl, 13, forced to flee Sweden after being savagely raped continually harrassed by Muslim migrants”