Brought to you by the Rothschild PTB.

If Obama behaves like an idiot that is because he has been told to do exactly that.

– Total Hypocrite: Obama Attempts to Slam Putin, Incriminates Himself Instead:

Editor’s Note: The ridiculous hypocrisy of this is enough to make one’s head implode. Then again, this is a guy who just got done telling the United Nations that America is “a force for good” in the world without bursting into laughter. 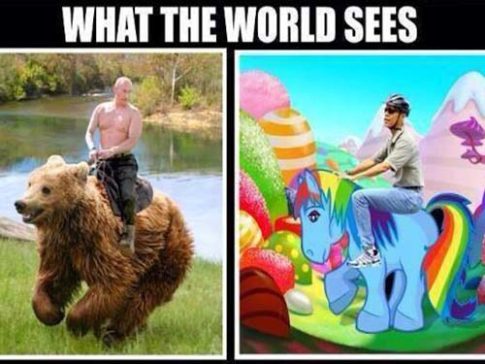 Barack Obama recently criticized presidential candidate Donald Trump’s admiration of Vladimir Putin, but his complaint was hypocritically laughable. Though no one in their right mind would pretend the Russian president is any kind of saintly figure, Obama’s choice of words in scrutinizing his Russian counterpart turned into a largely accurate description of himself.

The American president attacked Trump for praising Putin as being a “strong leader” despite the fact that, according to Obama, Putin “invades smaller countries,” jails political opponents, controls his country’s media, and has driven Russia’s economy into recession.

Let’s go through those claims one by one.

In 2011, Obama invaded Libya, the country with the highest standard of living in Africa, plunging the rich democracy into a perpetual state of civil war. U.S. media tried to claim the American role in this conflict was secondary in a so-called “leading from behind” capacity. But the truth is the U.S. was the second biggest, if not the biggest contributor to this war (depending on the report). It was an American drone that struck Muammar Gaddafi’s motorcade, effectively sealing the fate of the Libyan leader.

Obama is also actively bombing Syria, Yemen, Somalia, Pakistan, Afghanistan, and Iraq, to name a few. None of these are considered large countries, especially when compared to United States’ military spending and the number of bases it has worldwide. If anything, these are all incredibly poor and relatively small countries.

On the other hand, Putin is only bombing Syrian territory at the formal request of the Syrian regime, not as an attempt to invade a sovereign nation. Regarding Ukraine, Russia also annexed Crimea following a peaceful referendum in which the public voted overwhelmingly in favor of secession from Ukraine. Despite regular reports from Western media that Putin invaded Ukraine, Foreign Minister Sergei Lavrov’s challenge to the West to present any evidence of a Russian invasion into Ukraine has gone unanswered. In fact, previously leaked phone calls seemed to indicate it was the Obama administration that first interfered with Ukrainian politics, effectively ousting pro-Russian Viktor Yanukovych from power.

Obama passed the NDAA 2016 (National Defense Authorization Act), which authorizes the U.S. military to detain American citizens indefinitely without trial. Such a law would be the envy of any so-called dictator vying for authoritarian control of their country, yet Obama appears to have passed a law his counterparts could only dream of.

Further, the Obama administration has carried out a full-scale attack on whistleblowers, as evidenced by the plights of Chelsea Manning, Edward Snowden, Julian Assange, and Jeffrey Sterling. Assange might even have been the victim of an assassination attempt in August of this year, though the details of that incident are still unclear.

In 2009, a Yemeni journalist named Abdulelah Haider Shaye reported on a drone strike in Yemen that struck a village, killing women, children and the elderly. Shaye openly published a story showing the remnants of the attack indicated the strike was waged by American weaponry the Yemeni arsenal did not possess.

In a completely unrelated matter — if one is so naïve as to believe that — the reporter was then arrested and placed in Yemeni prison. After the public began to demand his release, the Yemeni leadership at the time agreed to release him. However, before he was freed, Yemeni leader Ali Abdullah Saleh received a phone call from none other than Obama himself, who expressed his concern over the plan to release the journalist. Shaye’s planned release was canceled

Obama’s ability to jail opposition all over the world by merely picking up his phone makes anything Putin has ever done — at least that we know of — pale in comparison.

Whether or not Obama can personally control the media, one cannot dispute the fact Western media works in tandem with the establishment, often becoming the mouthpiece of the United States government.

Western media regularly quotes unnamed officials without question; peddles the pro-war agenda the Obama administration has advocated on numerous occasions; refers to unreliable sources without further investigation; and fires writers who question the motives of American allies. Western media has assisted all of the American-led and associated wars to date, helping Obama do his dirty work.

Shaye’s experience in Yemen should be evidence enough that Obama has the ability to control the media throughout the world, as well as at home — something Putin could only dream of.

Further, the president and his administration have ties to influential figures throughout the corporate media.

Putin drove his economy into recession

Obama may have inherited a waning economy under George W. Bush, but he decided to continue a number of corrupt policies that plunged the United States economy — not to mention the world economy — into a recession that most of us have still not recovered from. As acknowledged by Oliver Stone and historian Peter Kuznick in “The Untold History of the United States”:

“The biggest winner under Obama was Wall Street. After wrecking the economy with speculative innovations, including credit-default swaps and collateralized debt obligations, bankers came begging for bailouts. Not surprisingly, Obama’s economic advisors – almost all disciples of Bill Clinton’s Treasury secretary Robert Rubin – were more than happy to assist with a $700 billion financial bailout program.” What mirror is Obama looking through?

Even if Vladimir Putin were as frighteningly evil as Western media attempts to portray him to be, it could not possibly detract from the fact Obama fully embodies what has come to be known as the “pot calling the kettle black.” This is also known as the “people who live in glasshouses shouldn’t throw stones” quip.

It is quite telling of how disastrous American political discourse has become that someone as overtly racist, intolerant, unpredictable and unreliable as Donald Trump is the only person talking any diplomatic sense regarding Russia — even when compared to a peace prize-winning president.

How Obama was able to say those words with a straight face gives insight into the delusion the doctrine of “American exceptionalism” has created throughout American politics.