“The UN/USA breaks its agreement & goes back on its word more times than you can count to ten.
The distrust all countries have for Americans & American involvement economically and militarily is universal.
It has outlived its usefulness and is an embarrassment.
But the Rothschilds do still need it to create conflict.” 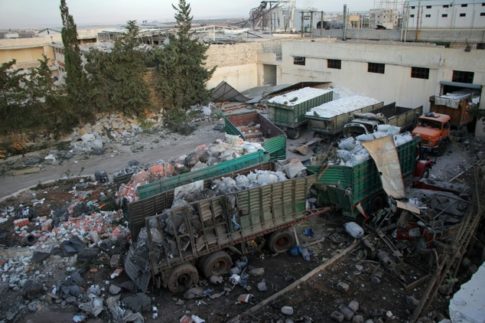 The Zio-Anglo-American Axis was compelled to change
the conversation from their previous war crime of killing
over 60 Syrian soldiers on their base. Their handiwork
is shown here: First daylight pics of UN aid convoy that
was destroyed last night by American/Israeli airstrikes.

The USA has been operating under fierce criticism ever since their Air Force committed the most egregious war crime since the recent agreement with Russia and Syria was signed.

Not even a week went by and the American military went rogue by attacking a Syrian government base killing 62 soldiers and injuring more than 100 with surgically precise airstrikes.

HOW THE US BECAME ISIS’S AIR FORCE

Not only was this atrocity not an accident, it was perfectly coordinated with two critical military initiatives.  As follows:

“Seven minutes after US-led coalition bombed the Syrian Army with phosphorus bombs, killing more than 60 soldiers and wounding more than 100, Daesh unleashed their assault on the Deri-Ezzor government enclave. The U.S. pretends it was an accident, and that the timing was a coincidence.”
(Source: Connecting The Dots Between: NYC Explosion, US War Crime in Syria, and the Daesh Assault on Deri-Ezzor)

A second military assault was also exactly timed with these U.S. airstrikes as the Israeli military attacked Syrian positions contiguous to the Golan heights.

Both of these military incursions were quite deliberately carried out with the U.S. attacks on the Syrian troops.   Hence, there is no plausible deniability for the Obama Administration to lean on.  They knew exactly what they were doing by committing these war crime(s).  The Syrian War in its entirety is actually one protracted war crime.

The Syrian Holocaust: A Preplanned Genocide And Forced Exodus 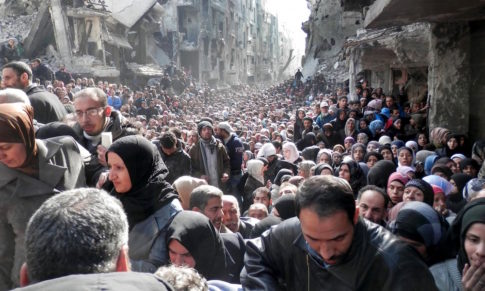 Russia Denies Any And All Involvement With the UN Convoy Attack

The Russian media has since been swift and emphatic to deny any involvement with the attack on the UN convoy.  Each of the major Russian news platforms has posted articles wherein the MoD (Ministry of Defence of the Russian Federation) asserts with the highest authority that Russia had nothing to do with these attacks.

Russia, Syria did not deliver strikes on UN aid convoy near Aleppo — ministry

Why did the U.S. and ISIS attack a UN convoy?

The Zio-Anglo-American war strategy in Syria (as well as throughout the Northern Levant) has always been to remove the indigenous populations from their ancestral lands.  Only in this way can the Greater Israel project be completed.   By showing the Syrian people that even the UN missions are no longer safe and/or able to convey direly needed food and supplies, the will be compelled to migrate from their homes far away from the war zone. The flood of war refugees and economic migrants that has washed over Europe is the direct result of this purposeful plan.

This US attack on the UN convoy and warehouse dramatically destroyed vital subsistence material for those in the greatest need and also showed them that nothing is safe.  It also sends a message to the whole of humanity that the United Nations is nothing but a puppet of the Anglo-American Axis.[1]  Not only is the UN headquarters located in New York City and funded to a highly disproportionate level by the USA, it is a creature of Anglo-American imperialism as executed by the international banking cartel—a global crime syndicate.

As usual, the US, UK, Israel and other co-conspirators have colluded to carry out a major false flag operation.  Once again, Russia and Syria are the targets of carefully scripted propaganda that the whole MSM trumpets throughout the world.  They are both immediately blamed  — as if in concert by the entire Western MSM — so as to pre-empt even the slightest intention to conduct a high integrity investigation.

This formula has been used time and again to demonize the good guys.  Putin’s Russia is only looking to wipe out ISIS, while the USA & Company works intimately with ISIL to guarantee the survival and flourishing of the Islamic State throughout the Northern Levant.  President Putin endeavors to eliminate all terrorism in Syria while the US military and CIA collaborate closely with the many terrorist organizations in the region.

All of these false flag attacks and subsequent cover-ups have been engineered to advance the primary Zio-Anglo-American mission known as the Greater Israel project.  This is the real purpose behind the unprovoked war on Syria.  And even though the world community of nations now knows about this clandestine agenda, the perps seem hellbent to carry out this very imperialistic plan in broad daylight during prime time.

In other words, they don’t even care anymore if the whole world is on to their criminally insane and megalomaniacal scheme to take over the entire planetary civilization. 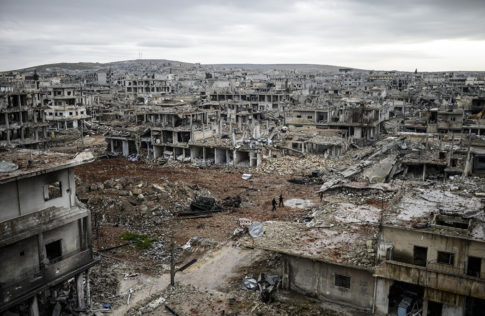 The Western warmongers have transformed Syria into “a dystopian, post-apocalyptic wasteland”.

Let’s face it, the criminally insane and psychopathic leadership of the Anglo-American Axis (AAA) is dead set on starting the hot phase of World War III.  They have already proven that they will do anything and everything they can to sufficiently demonize Russia and its allies so that WW3 can be instigated and prosecuted around the globe.  Nakedly heinous acts like bombing UN convoys and warehouses do just that.

By attacking vital UN assets, there is an implicit obligation from all the member nations to rise up and punish the country that dared to perpetrate such a deadly and destructive assault on a humanitarian mission.  In this fashion will the countries be corralled into a pen of warmongering against the international pariah—Russia (even though Russia had nothing to do with such a barbaric act).

This process is known as the Hegelian Dialectic and is quite effective at manufacturing consent.  In this instance, the AAA is determined to generate worldwide consent to make war against Russia.  The instigators are livid that Russia has literally blown up their Greater Israel project, as it was the very basis of their future One World Government. Their planned Third World War is also a critical component of their depopulation agenda, which the Kremlin has exposed through the Russian alternative media.  The same media has revealed much 9/11 truth, which also irks the Western powers who pulled off that mother of all false flag operations.

The Anglo-American Axis is represented, first and foremost, by the major English-speaking countries of the world: USA, UK, Canada, Australia, New Zealand and Israel. The European member nations of NATO, such as Germany, France, Italy, Spain, Portugal, Belgium, Luxembourg and the Netherlands are also closely aligned with the AAA as are all the Scandinavian countries. So are the Asian Pacific Rim nations of Japan, South Korea, Taiwan and the Philippines. Saudi Arabia, Turkey, Egypt, Pakistan, Kuwait, Jordan, Bahrain, United Arab Emirates, and Qatar also owe their allegiance to the AAA but some of these may be changing. The World Shadow Government is an ultra-secret, supranational organization which completely controls the Anglo-American Axis, as well as the European Union, NATO, among many other institutional entities which constitute the Global Control Matrix.
(Source: Vladimir Putin’s Russia: Perfect Foil To The Anglo-American Axis And Their New World ‘Order’)

What in the world is really going on in Syria?

6 thoughts on “False Flag Attack on UN Convoy Perpetrated by US, ISIS and/or Israel Air Force”