“Who does he think he is?  I am no American puppet. I am the president of a sovereign country and I am not answerable to anyone except the Filipino people, nobody but nobody. You must be respectful. Do not just throw questions. Son of a bitch I will swear at you in that forum.”
– Philippine president Rodrigo Duterte 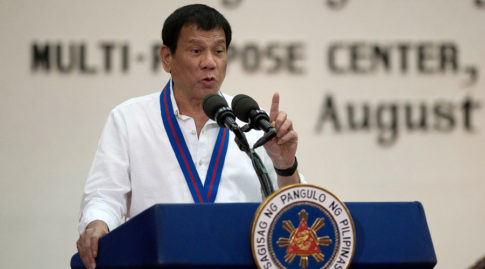 – “Who Is He To Confront Me?” – Philippines President Unloads On “Son Of A Bitch” Barack Obama:

What was an embarrassing weekend for president Barack Obama, whose arrival at the G-20 summit in China was a case study in diplomatic humiliation, just turned even worse when on Monday, Philippine president Rodrigo Duterte warned the US president not to question him about extrajudicial killings, or “son of a bitch I will swear at you” when the two presidents meet at a summit in Laos in the coming days.

The topic of Duterte’s killing spree, supposedly involving mostly criminals and drug-traffickers, without due process has raised eyebrows most recently by the United Nations, which urged the Philippines to stop executing and killing people linked to drug business and threatened that “state actors” could be punished. As a result, two weeks ago Duterte lashed out at the UN and threatened that the country could leave the UN. “Maybe we’ll just have to decide to separate from the United Nations. If you’re that rude, son of a bitch, we’ll just leave you,” Duterte told reporters in Davao, quoted by Bloomberg. “I don’t give a shit about them,” he added. “They are the ones interfering. You do not just go out and give a shitting statement against a country.”

Fast forward to today when the outspoken president lobbed a preemptive warning at Obama, and before flying to Laos where the two heads of state are set to meet, said that he is a leader of a sovereign country and is answerable only to the Filipino people. He was answering a reporter’s question about how he intends to explain the extrajudicial killings to Obama. More than 2,000 suspected drug pushers and users have been killed since Duterte launched a war on drugs after taking office on June 30.

In his typical foul-mouthed style, Duterte was quoted by AP as responding: “Who does he think he is?  I am no American puppet. I am the president of a sovereign country and I am not answerable to anyone except the Filipino people, nobody but nobody. You must be respectful. Do not just throw questions. Son of a bitch I will swear at you in that forum,” he said.

Duterte went on to blame the US for causing the unrest on the southern Philippines Island of Mindanao. “As a matter of fact, we inherited this problem from the United States,” he said. “Why? Because they invaded this country and made us their subjugated people. Everybody has a terrible record of extra-judicial killing. Why make an issue about fighting crime?” He added: “Look at the human rights of America along that line. The way they treat the migrants there.”

Aware of the firestorm his question would provoke from his less than diplomatic peer, it wasn’t clear whether Obama plans to raise the issue of extrajudicial killings with Duterte during a meeting on the sidelines of the summit of the Association of Southeast Asian Nations.

“Who is he to confront me?” Duterte said, adding that the Philippines had not received an apology for misdeeds committed during the U.S. colonization of the Philippines. He pointed to the killing of Muslim Moros more than a century ago during a U.S. pacification campaign in the southern Philippines, blaming the wounds of the past as “the reason why (the south) continues to boil” with separatist insurgencies. Duterte then once again pointed to human rights problems in the United States.

Last week, Duterte said he was ready to defend his bloody crackdown on illegal drugs, which has sparked concern from the U.S. and other countries. The president also said he would demand that Obama allow him to first explain the context of his crackdown before engaging the U.S. president in a discussion of the deaths.

In response, Obama suggested Monday his planned meeting with Duterte may not go forward. “I always want to make sure if I’m having a meeting that it’s productive and we’re getting something done,” Obama said during his news conference.

“If and when we have a meeting, this is something that is going to be brought up,” Obama said, referring to the Philippines’ controversial record of combating drug crime since Duterte took office earlier this year.

Obama has been attending a meeting of the Group of 20 nations in Hangzhou, China, where his infamous snub by China made global headlines over the weekend. It appears he may have hed enough snubs for one trip.