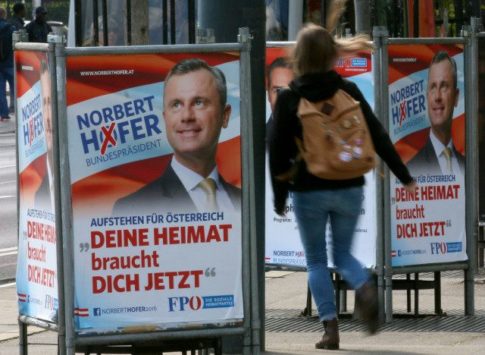 A leading pollster in Austria is predicting a win for anti-mass migration candidate Norbert Hofer, as Hofer praises government ministers who have taken a harder line on mass migration.

The momentum for the anti-mass migration Freedom Party (FPÖ) candidate for the presidency of Austria, Norbert Hofer, is gaining even more steam. A new poll shows that 38 per cent of Austrians, including a leading pollster, believe he will win the re-run of the election on October 2nd compared to rival Alexander Van der Bellen who managed 34 per cent support.

The poll conducted by OGM on behalf of Austria’s Kurier newspaper, shows that many Austrians are undecided, but OGM boss Wolfgang Bachmayer believes the numbers will favour Mr. Hofer.

According to Mr. Bachmayer, while there is a large portion of voters who remain undecided, he is placing his bets on Mr. Hofer. The pollster said that Mr. Hofer will likely win over undecided voters the more he presses on the issues of security, asylum seekers, and integration of Muslims and others into Austrian society.

Mr. Hofer recently launched his official campaign for the re-run of the election on the theme of security, with his campaign manager and FPÖ MP Herbert Kickl saying that Mr. Van der Bellen would not change anything in regard to migrants flooding into the country.

Mr. Bachmayer said that the only way former Green Party leader Mr. Van der Bellen could win would be to mobilise voters who describe themselves as “unmotivated” to go to the polls.

Mr. Bachmayer said that Mr. Van der Bellen has a “proportion of floating voters that was significantly higher than Hofer. For Van der Bellen there were two out of three, for Hofer it was one in three. Van der Bellen must mobilise these voters”. “Floating voters” being those who support the mainstream parties that failed to qualify for the second round of the election in April.

The FPÖ candidate also praised three ministers in the Austrian government who have taken a harder line on asylum seekers and mass migration.

Speaking of Foreign Minister Sebastian Kurz, Interior Minister Wolfgang Sobotka, both conservatives and members of the Austrian People’s Party, and Defence Minister Hans-Peter Doskozil of the Socialists, Mr. Hofer said, “These three people do a good job”, and hoped that they would all be able to cooperate with him when he becomes president.

Speaking on the all-but-dead TTIP agreement, Mr. Hofer said that he would not agree to any such trade agreement without taking it to the people via a referendum.  He also spoke of a possible “union within a union” for Austria with several former members of the Austro-Hungarian Empire, like Hungary, Croatia, and the Czech Republic, to have a common asylum policy which would be much stricter than that of Western Europe.

Mr. Hofer also stated that he didn’t have any lack of motivation for this now third campaign in the span of a year saying that he didn’t expect to sleep on the night of the election and said: “I am very motivated, I’m a workaholic.”