Why is it that I have a feeling that this will not end well for Horst Wenzel? 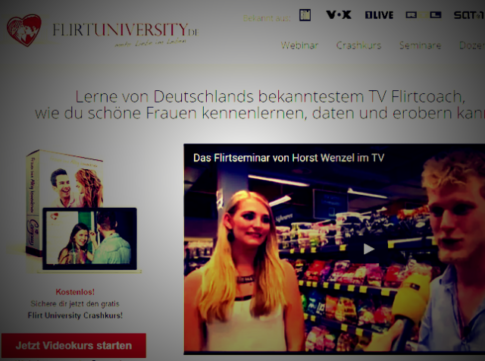 – ‘Flirt Expert’ To Teach Migrants How To Pick Up German Women:

A so-called “flirt expert” will be teaching migrants in Essen, Germany, how to flirt and use dating sites so they can pick up German women.

Horst Wenzel describes himself as Germany’s number one “flirt coach” on his website Flirt University. Mr. Wenzel is now undertaking a controversial new project aimed at helping new migrants to Germany pick up German women both in real life and on online dating websites.

According to Mr. Wenzel, flirting and picking up girls is a large part of the integration process and hopes that the migrants will “fall in love with Germany” – or at least their women, reports German paper Westen Allgemeine Zeitung.

Reading like a mix pick up artistry and self-help coaching, the Flirt University website claims that it helps people make connections with members of the opposite sex. On the page that is advertised toward men it says that the courses will teach how to get phone numbers from attractive girls, and how to perform the perfect kiss. The group also claims that their methods will work to get men a “hot wife” even if they are merely “ordinary”.

The credentials page on the site does not list any academic or formal qualifications but rather a litany of praise from German media such as the newspaper Frankfurter Rundschau who called the programme the “driving school for flirting”.

Mr. Wenzel, 27, says that he is excited to start the workshop for migrants on September 6th, facilitated by the Workers’ Welfare Association (AWO) who are a government funded labour movement agency dedicated to “solidarity, tolerance, freedom, equality and justice”.

One of the topics that will be discussed at the workshop will be the subject of online dating. Online dating is a “very popular” subject according to Mr. Wenzel. He claimed that he wanted to help migrants be more successful at picking up girls on dating apps, likely to be used for casual sexual encounters.

On the Flirt University website the group claims that their techniques do not involve “magic or stupid tricks”, but rather “the aim is to develop a more confident and interesting personality”.

For Mr. Wenzel the cultural differences of men from the Middle East and North Africa and their views toward women are not overly important. He says that he looks at the migrants as wanting affection and refused to have any “prejudice” toward the attitudes of the migrants beforehand.

Earlier this year in Germany a sexual health councillor also taught migrants how to properly flirt with German girls. The seminar ran by NGO Pro Familia attempted to teach migrants about sexual health issues and treatment of women. The Flirt University course is much more explicit in teaching migrants the best ways to attract German girls and pick them up from bars and online.