– “If This Does Not Disqualify Hillary For The Presidency, It’s Hard To Know What Will”:

Even the traditionally ‘establishment’ Wall Street Journal is waking up to the utter incredulity of an American media (and citizenry) which appears capable of cognitive dissonance on an epic scale when it comes to Hillary Clinton. As Kimberly Strassel explains the latest emails show that State and the foundation were one seamless entity. 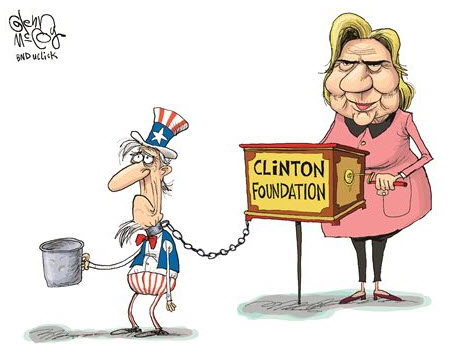 In March this column argued that while Mrs. Clinton’s mishandling of classified information was important, it missed the bigger point. The Democratic nominee obviously didn’t set up her server with the express purpose of exposing national secrets—that was incidental. She set up the server to keep secret the details of the Clintons’ private life—a life built around an elaborate and sweeping money-raising and self-promoting entity known as the Clinton Foundation.

Had Secretary Clinton kept the foundation at arm’s length while in office—as obvious ethical standards would have dictated—there would never have been any need for a private server, or even private email. The vast majority of her electronic communications would have related to her job at the State Department, with maybe that occasional yoga schedule. And those Freedom of Information Act officers would have had little difficulty—when later going through a state.gov email—screening out the clearly “personal” before making her records public. This is how it works for everybody else.

Mrs. Clinton’s problem—as we now know from this week’s release of emails from Huma Abedin’s private Clinton-server account—was that there was no divide between public and private. Mrs. Clinton’s State Department and her family foundation were one seamless entity—employing the same people, comparing schedules, mixing foundation donors with State supplicants. This is why she maintained a secret server, and why she deleted 15,000 emails that should have been turned over to the government.

Most of the focus on this week’s Abedin emails has centered on the disturbing examples of Clinton Foundation executive Doug Band negotiating State favors for foundation donors. But equally instructive in the 725 pages released by Judicial Watch is the frequency and banality of most of the email interaction. Mr. Band asks if Hillary’s doing this conference, or having that meeting, and when she’s going to Brazil. Ms. Abedin responds that she’s working on it, or will get this or that answer. These aren’t the emails of mere casual acquaintances; they don’t even bother with salutations or signoffs. These are the emails of two people engaged in the same purpose—serving the State-Clinton Foundation nexus.

The other undernoted but important revelation is that the media has been looking in the wrong place. The focus is on Mrs. Clinton’s missing emails, and no doubt those 15,000 FBI-recovered texts contain nuggets. Then again, Mrs. Clinton was a busy woman, and most of the details of her daily State/foundation life would have been handled by trusted aides. This is why they, too, had private email. Top marks to Judicial Watch for pursuing Ms. Abedin’s file from the start. A new urgency needs to go into seeing similar emails of former Clinton Chief of Staff Cheryl Mills.

Mostly, we learned this week that Mrs. Clinton’s foundation issue goes far beyond the “appearance” of a conflict of interest. This is straight-up pay to play. When Mr. Band sends an email demanding a Hillary meeting with the crown prince of Bahrain and notes that he’s a “good friend of ours,” what Mr. Band means is that the crown prince had contributed millions to a Clinton Global Initiative scholarship program, and therefore has bought face time. It doesn’t get more clear-cut, folks.

That’s highlighted by the Associated Press’s extraordinary finding this week that of the 154 outside people Mrs. Clinton met with in the first years of her tenure, more than half were Clinton Foundation donors. Clinton apologists, like Vox’s Matthew Yglesias, are claiming that statistic is overblown, because the 154 doesn’t include thousands of meetings held with foreign diplomats and U.S. officials.

Nice try. As the nation’s top diplomat, Mrs. Clinton was obliged to meet with diplomats and officials—not with others. Only a blessed few outsiders scored meetings with the harried secretary of state and, surprise, most of the blessed were Clinton Foundation donors.

Mrs. Clinton’s only whisper of grace is that it remains (as it always does in potential cases of corruption) hard to connect the dots. There are “quids” (foundation donations) and “quos” (Bahrain arms deals) all over the place, but no precise evidence of “pros.” Count on the Clinton menagerie to dwell in that sliver of a refuge.

But does it even matter? What we discovered this week is that one of the nation’s top officials created a private server that housed proof that she continued a secret, ongoing entwinement with her family foundation – despite ethics agreements – and that she destroyed public records. If that alone doesn’t disqualify her for the presidency, it’s hard to know what would.