“With personal experience qualifying this article, the logic behind the continued illegality of Cannabis for health reasons can only be that there is insufficient profit in such a panacea. As always, it’s down to greed and big bucks.

In UK we can buy Hemp Oil, yet ‘proper organic Cannabis Oil” is available, but at a much higher price. We’re thwarted by BigPharma control at every corner.

I read that Cannabis leaves, in a salad on a daily basis, or mixed in a Brocolli Soup with Ginger, Turmeric, Cumin & Coconut Oil, are probably the most potent natural combination for destroying cancer cells.”

Cannabis can kill cancer cells and shrink one of the most serious types of brain tumours, new advice reveals.

The National Institute on Drug Abuse in the US has admitted, in its revised publication on marijuana, that the drug offers benefits to some cancer patients.

The report states: ‘Recent animal studies have shown that marijuana extracts may help kill certain cancer cells and reduce the size of others.

‘Evidence from one animal study suggests that extracts from whole-plant marijuana can slow the growth of cancer cells from one of the most serious types of brain tumours.

‘Research in mice showed that these extracts, when used with radiation, increased the cancer-killing effects of the radiation.’

The term medicinal marijuana refers to using the whole unprocessed plant or its basic extracts to treat a disease or symptom.

Currently the drug is not recognised by the US Food and Drug Administration (FDA) as a medicine.

However, studies of the chemicals in marijuana – cannabinoids – has led the FDA to approve two medications that contain cannabinoid chemicals.

Currently two cannabinoids, of around 100, are of medical interest – THC and CBD.

CBD is a cannabinoid that does not affect the mind or behaviour.

It is thought to be useful in minimising pain and inflammation, controlling epileptic seizures and possibly treating mental illness and addictions.

In the UK, THC is the active ingredient in the prescribed drug Sativex.

It is currently only licensed to treat and relive the pain of muscle spasms in MS patients.

Scientists are also conducting clinical trials and preclinical studies into the effects of marijuana on:

The new advice from the National Institute on Drug Abuse comes as a group of senators put pressure on the US federal government to recognise the medicinal value of the drug. 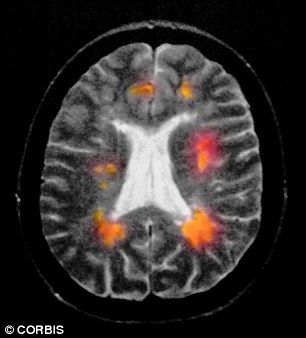 Medication containing cannabinoids, from marijuana, is licensed to treat MS – pictured on a brain scan – patients in both the US and UK

The Compassionate Access, Research Expansion and Respect States Act was introduced in March.

It proposes moving cannabis from a schedule I to a schedule II drug, recognising it has some medicinal value.

The proposed bill does not, however, legalise marijuana in all states, but permits states to set their own policies, the Daily Caller reported.

‘It couldn’t be any clearer that marijuana has medical value,’ Tom Angell, chairman of the Marijuana Majority, told The Daily Caller.

‘When even NIDA and the surgeon general are acknowledging that marijuana can help people who are suffering, it is time for the Obama administration to reschedule the drug.

‘The attorney general can initiate that process today, and there’s no reason for him not to, especially when polling shows that such a huge majority of Americans supports medical marijuana.’

Twenty-three states in the US currently have laws legalising the use of marijuana in some form.

Four states – Colorado, Alaska, Oregon and Washington – have legalised the drug for both medicinal and recreational use.

– What Can We Say About a System that Criminalizes a Safe Painkiller (0 Deaths) and Promotes Big Pharma Opiates that Have Killed 165,000 Americans?

– Uses For Hemp You Won’t Learn From Mainstream Media

– Cannabis – What is CBD (Cannabidiol)?

– Cannabis And The Endocannabinoid System

– Cannabis Heals The Human Nervous System, And It Has For Centuries

– After chemotherapy left man with blisters on his hands and feet, cannabis oil CURED his cancer

– After Healing His Own Cancer with Cannabis, Self-Taught Doctor Helped over 5000 Patients