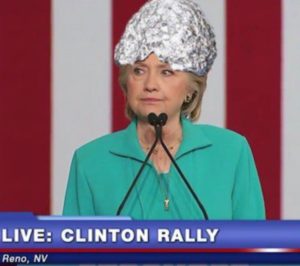 Earlier this week, I published a post titled Questioning Hillary’s Health is Not Conspiracy Theory, in which I wrote:

This is an incredibly big deal, and the mainstream media intuitively knows what it means. It means a total loss of legitimately, prestige and power. All of which is well deserved of course.

So here’s the bottom line. 2016 represents the true beginning of what I would call the Media Wars. Alternative media is now capable of driving the news cycle. Mainstream media now has no choice but to fight back, and fight back it will. It will fight back dirty. This is going to get very ugly, but by the time the dust has settled, I think much of the mainstream media will be left as a shell of its former self.

When I wrote the above, I had no idea that two days later Hillary Clinton would deliver a speech in Nevada specifically targeting a nebulous movement referred to as the “alt-right,” as well as several of the prominent websites associated with it. Never in a million years did I think Hillary herself would so publicly enter the Media Wars.

The speech itself was pretty bizarre. Although I found her effective on several fronts, I believe it will ultimately backfire by providing free publicity and fame to many of those she intended to demonize. Precisely because she is so polarizing, Clinton can only make an opposing movement far stronger by engaging in direct attacks on them. She is incapable of being a unifying figure for this country, so the moment she calls out a group as her enemy, many people on the sidelines will suddenly say, well maybe they’re not so bad.

The whole thing reminded me of something I wrote in last week’s post, Election 2016 – Why Defeating Trump Won’t Make Trump Go Away:

Hillary Clinton and her supporters are making the case that Donald Trump in 2016 represents some sort of Hitlerian existential threat that must be defeated at all costs. They are desperately trying to sell to the public the notion that all concerns about her incredibly shady past can and should be set aside for the time being because keeping Trump out of the White House takes precedence over everything else. Of course, such an argument is easily dismissed by anyone who is aware enough to understand that Trump (like Sanders) merely serves as a vehicle for justified anger percolating across the land, and that defeating him as an individual accomplishes absolutely nothing in the long-term.

Indeed, a Donald Trump loss is likely to fan the flames of populist angst further, particularly if Hillary Clinton continues along with status quo business as usual as if nothing ever happened, which she undoubtably will. Ironically, many of these delusional “lesser of two evils” Hillary supporters may be unpleasantly surprised to discover that media mogul Trump could even more formidable (and dangerous) than President Trump. Which is precisely why merely fighting against symptoms of a rigged and unethical system solves absolutely nothing, and ultimately makes the underlying problem worse.

The other problem with the speech were its laughable and obvious contradictions. For example, she starts off by saying the Trump campaign peddles in conspiracy theories found in the “far dark reaches of the internet.” She goes on to name a few of these “dark reach” sites, spending a lot of time on Infowars and Breitbart. This is where things start to come unglued. If these sites are comparable to supermarket tabloids (as she claimed), why craft an entire speech around targeting them? Why would you spend so much energy on crazy fringe sites? The reason is because they aren’t fringe, and as such, she’s decided to personally engage in the burgeoning Media Wars.

As I discussed in my post from a couple of days ago, New York Times columnist Farah Manjoo recently whined on Twitter about how Infowars was appearing at the top of Google search for Hillary health queries. He publicly called for Google to “fix” the problem. That was Tuesday. Two days later the frontrunner for the Presidency of these United States also attacks Infowars. Something big and unprecedented is going on here.

Moreover, after her tirade against Alex Jones and Infowars, Hillary proceed to not just go after Breitbart, but she actually read multiple headlines from the website. Again, if these sites are so fringe, why obsess over them to such an extent? It’s because alternative media is now driving the news cycle and this is extraordinarily dangerous to status quo influence and power. This is simply a fact, whether you like Breitbart or Infowars or not.

But that’s just one bizarre aspect of the speech. What was even more revealing were her shamelessly misleading and contradictory comments on several topics. For one, she talked about how Trump would want foreign travels to the U.S. be subject to screening based on their religion. She then goes on to state how the only other country or group in the world that does this is ISIS. Unfortunately for her, this isn’t exactly true. As Michael Tracey points out:

Of course, we all know why the omission. It’s because the Saudis have given between $10-$25 million to the money-laundering charity fraud known as the Clinton Foundation.

Moving along, toward the end of the speech Hillary quotes a Mexican proverb. She said: “Tell me with whom you walk and I will tell you who you are.” To which Max Abrams poignantly replies:

Hillary says of Trump, “Tell me with whom you walk and I will tell you who you are” as she hobnobs with the world’s most oppressive regimes.

All of this perfectly highlights the unmistakeable fatal flaw with Hillary Clinton as a candidate. She is so compromised, so shady and so corrupt, that she can’t successfully take the moral high ground even against someone like Trump.

All of that aside, she could have probably spun this speech in an effective manner if she hadn’t made one really stupid and very revealing mistake. Despite the crux of her speech being that Donald Trump is a racist who peddles in conspiracy theories, she launched into one of the most absurd conspiracy theories of all when she blamed Russia’s Vladimir Putin for the rise of the “alt-right” and global nationalism. Indeed, she actually called him the grand-godfather of it. Whatever the heck that means.

The de facto merger between Breitbart and the Trump Campaign represents a landmark achievement for the “Alt-Right.” A fringe element that has effectively taken over the Republican Party.

This is part of a broader story — the rising tide of hardline, right-wing nationalism around the world.

Just yesterday, one of Britain’s most prominent right-wing leaders, Nigel Farage, who stoked anti-immigrant sentiments to win the referendum to have Britain leave the European Union, campaigned with Donald Trump in Mississippi.

Farage has called for a bar on the children of legal immigrants from public schools and health services, has said women are and I quote “worth less” than men, and supports scrapping laws that prevent employers from discriminating based on race — that’s who Donald Trump wants by his side when he is addressing an audience of American voters.

And the grand-godfather of this global brand of extreme nationalism is Russian President Vladimir Putin.

This is from someone who just spent 20 minutes bashing Trump and his hordes of conspiracy theorists. Very bizarre.

Finally, I thought her concluding statement was quite telling. She states:

We want to build an America where everyone has a place. Where if you work hard and your do your part you can get ahead and stay ahead. That’s the basic bargain of America.

Here she seems to be implying that this basic bargain has been broken. That working hard is no longer enough and people are falling behind in droves. I agree, but why is that? Why have things not improved under Obama, and how is Hillary, who wants to carry on with Obama’s policies possibly going to restore this bargain?

She won’t, which is precisely why Trump and Sanders both created movements over the past year and a half. Hillary Clinton is not someone who can unite the country and she’s not someone who can fix our problems. It’s preposterous to think the consummate status quo insider, a war hawk who will undoubtably lead the nation into WW3 can heal this country’s wounds.

It’s not that I think Donald Trump can, it’s just that I know Hillary Clinton won’t.