– Debtors’ Prison: Judge Gives Cancer Patient 90 Days in Jail for Being Too Sick to Pay Bills:

This judge cares more about money than people. 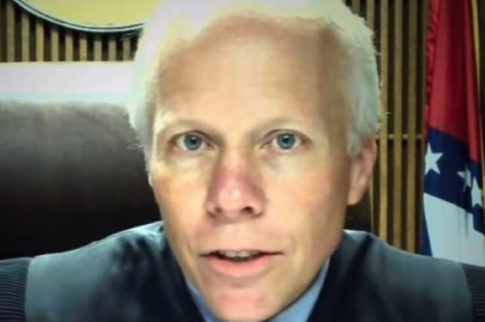 While rapists that admitted to their crimes are getting no jail time and no convictions, likely because they or their parents were wealthy, those that aren’t as financially well-endowed are being thrown into jail for the saddest reasons.

[If you understand how the system is designed you know that it is NOT “because they or their parents were wealthy”, it is because of the the law that governs the system on a level that is above countries and governments. Almost all countries in the world are now companies. Those that are not and are still refusing to create a Rothschild owned central bank, are getting attacked, like Syria. The Vatican has created the UCC (Uniform Commercial Code). Commercial law is above everything and that explains why the penalty for rape is much less than for tax fraud. If you are going public with this knowledge, then you are getting yourself into deep trouble. Knowing this explains all the major wars and conflicts we are seeing right now on the planet. It is all about cartel legislation and cartel areas. Ukraine was created as an artificial state in 1918 according to canonical law for 99 years. Now the area that we call Ukraine is being “renegotiated”. Take the end of the Congress of Vienna in 1815 and add 99 years then you are finding yourself in 1914!!! Then take 1918, end of WW2, and add 99 years and we are in 2017!!! (WW2 has officially never ended. Sounds crazy, but do your research. It’s true.) What is of the utmost importance, is that you are getting prepared for financial/economic collapse, hyperinflation, civil war and WW3 (with very limited use of nuclear weapons.). Get together. Get out of the big cities. You also have to prepare for massive earth changes. Live nowhere near the coastline, live in high places. Live not near a volcano, fault line or in a place that could be easily endangered by flash floods, landslides, debris flow, etc. HERE is a possible scenario seen by one of the most outstanding seers. All the best. – I.U.]

Judge Milas “Butch” Hale from Sherwood, Arkansas has been accused of running a “modern-day debtor’s prison” after he recently sentenced a 44-year-old man with pancreatic cancer to 90 days in jail.

President and Executive Director of the Lawyers’ Committee for Civil Rights Under Law Kristen Clarke said of sentencing people like this to jail:

“People are doomed for failure when they appear before the court, and most significantly trapped in this never-ending cycle of expanding debt. With the resurgence of debtors’ prisons, we will continue to see people cycle in and our of jails and prisons across our country merely because of their inability to pay fines and fees tied to low-level, nonviolent offenses.”

Lee Robertson, the man with pancreatic cancer, first ran into trouble in 2009 when he was diagnosed and began his first round of chemotherapy. His sickness forced him to stop working, which eliminated his source of income and made it impossible for him to sustain himself. In the course of two weeks, Robertson wrote 11 checks to stores for small amounts ranging from $5 to $41 that all bounced.

After six years and seven arrests, Robertson ended up in Hale’s courtroom, where Hale said that the cancer patient owed the court $3,054.51 in fees and restitution. Robertson had been unable to pay these fines and checks because his pancreatic cancer has prevented him from returning to work.

Hale has come under loads of scrutiny for the way he runs the “hot checks division,” which is a court that assesses cases dealing with bad checks. The judge is now under investigation for the questionable practices he employs in his court.

The lawsuit outlines the lucrative system used, in which no family or friends are allowed to accompany the defendant and the defendant must sign a form that waives their right to an attorney. This leaves those being prosecuted completely vulnerable and unable to properly defend themselves or make an argument in their favor.

The suit claims that the court acts as an extension of a collections agency, essentially collecting money from those living in poverty in order to contribute more money to the city’s budget every year. Each overdrawn check can bring in $400 in fines and fees, not including the restitution to pay back the amount of the check.

“This is a broken court system that disregards due process rights at every turn,” Clarke added.

Hopefully justice will be served to this judge and others involved in this “scheme” so that less people living below the poverty line won’t have to continue to be huge contributors to the city’s budget.