– Hillary Responds To Health Allegations; Opens A Jar Of Pickles: “I Feel Like This Is An Alternate Universe”:

While Hillary Clinton continued her press conference radio silence, having avoided media Q&A for over 260 days, last night the Democratic candidate did appear on ACB’s Jimmy Kimmel live show where she responded to recent reports that her health is deteriorating, saying she feels like she is in an “alternative universe” and laughed off any questions about her health and stamina, arguing that the current speculation “makes no sense” because she doesn’t “go around questioning Donald Trump’s health.” 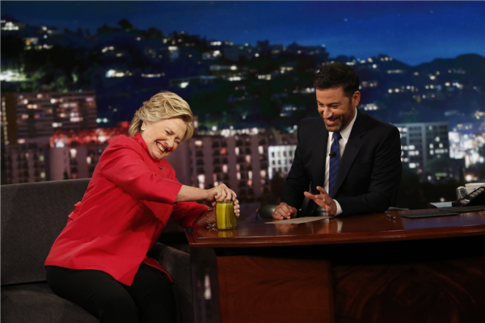 “I do feel sometimes like this campaign has entered into an alternative universe,” she told Jimmy Kimmel Live. “I have to step into the alternative reality, answer questions about am I alive, how much longer will I be alive.” Clinton was for the first time responding to allegations made by Trump and some of his backers that she is suffering health problems that could be problematic in the White House should she win the Nov. 8 election. Both Clinton and Trump have released notes from doctors declaring them physically fit for the presidency.

After Kimmel asked whether there was any truth to the rumors most recently raised by former New York City Mayor Rudy Giuliani, the Democratic nominee for president extended her wrist and told the late night host to take her pulse “to make sure I’m alive.” Kimmel obliged, taking Clinton’s pulse with his thumb and joking: “Oh my God, there’s nothing there!” We assume that was a joke.

Kimmel then asked Clinton to open a jar of pickles as a test of her strength (she did so successfully).

“Back in October, the National Enquirer said I’d be dead in six months. So with every breath I take I feel like it’s a new lease on life,” she quipped. “I don’t know why they are saying this. I think on the one hand it’s part of the wacky strategy,” Clinton said of the GOP push to paint her as unhealthy. “On the other hand, it absolutely makes no sense.”

Clinton said that sometimes Trump’s remarks about her – such as a recent charge that President Barack Obama and Clinton co-founded the Islamic State, which he later said was sarcasm – go beyond personal attacks and become harmful to U.S. national security. “There’s enough evidence now that when Trump talks the way he talks it actually helps the terrorists,” Clinton said. “I think it’s crazy, but I think it’s also harmful.” 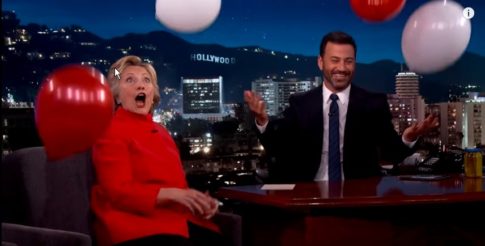 With the first general election debate approaching next month, Kimmel asked Clinton how she was preparing to face Trump. “You’ve got to be prepared for wacky stuff. I’m planning on drawing off my experiences from elementary school,” she said, noting that she also wanted Kimmel’s advice on how best to perform.

Later in the interview, Kimmel, acknowledging the continued fallout from the Democratic nominee’s use of a private email server, suggested that Clinton maybe consider “FaceTime” as an alternative to email. “I think that’s actually really good advice,” she said with a smile. The grandmother of two often talks about how much she loves using the technology while on the road and said she would be “distraught” without it.

Confirming that to Clinton the email scandal is a joke, Hillary said she isn’t worried about the additional e-mail release: “We’ve already released 30,000 plus, so what’s a few more.” And to think it only took constant, relentless lawsuits for her to make them public.