So far so good, however, there are some notable problems with the paper’s assumptions, as Citi head of G10 FX, Steven Englander, observes.

He writes that the paper’s basic framework is to take the standard US economic model used by the Fed, give it a negative shock big enough to push the unemployment rate up by 5 percentage points (big but not unprecedented over the last 50 years) and deploying the Fed’s policy rate, QE and forward guidance tools to see if they are adequate to get the economy back on track. Negative rates and helicopter money are not used.

He compares three policy approaches. The first assumes a linear world where fed funds can go into negative territory but there is no breakdown in the structure of economic relationships. It is probably not a realistic view of policy ineffectiveness at negative rates, but it is mean to be a baseline. The second just takes fed funds down to zero and keeps it there long enough for unemployment to return to baseline.

The third takes fed funds down to zero and augments it with additional USD2trn of QE and forward guidance. A variation on the third policy response function doubles the amount of QE in the second simulation.

In other words, the Fed is already factoring in a scenario in which a shock to the economy leads to additional QE of either $2 trillion, or in a worst case scenario, $4 trillion, effectively doubling the current size of the Fed’s balance sheet.

He continues his critique of the Fed’s argument as follows:

In the simulations. QE and forward guidance take 10yr yields down 225-300 bps depending on the starting point for fed funds and whether you do $2 trillion or $4 trillion for QE. But that is not going to work very well if by design fed funds and 10yr yields can’t go below zero. And if expected rates are already low then forward guidance does not have much room. Fed official will gave to keep a straight face while saying they we will keep rates at zero … forever.

What makes it work is that QE and committing to low rates for longer gets the long rate down quickly and this compensates for the inability to take short rates down as far as you would want. In the unconstrained model, the maximum drop in short rates is almost 9 percentage points, almost twice as much as in the constrained model, but the QE/forward guidance  lower takes (and keeps) long rates 75bps lower than when the Fed takes rates to zero and stops. When the Fed is starting from 3% fed funds, the combo can almost entirely offset the zero constraint, but only if the full $4 trillion QE is brought to bear. Starting from 2%, QE of $2 trillion is not enough to get long rates down far or fast enough to offset the shock.

All of which brings Englander to the following stunning conclusion:

I would have rewritten the conclusion as: “large-scale asset purchases and forward guidance about the future path of the federal funds rate have almost no ability to offset a shock in current circumstances, but down the road may be able to provide enough additional accommodation to fully compensate for a more limited [ability] to cut short-term interest rates in some, but not all and maybe even not most, circumstances.” The italics and colors show my changes.

Just as troubling, Englander admits that the nuanced read of the Fed paper admits it is effectively powerless to withstand a sharp recession: “The key policy issues and what drives the paper’s conclusions and my variant is the starting point. Were we to have a recession today or a year (or even two years) from now, it is very unlikely that the Fed weapons have anywhere near the potency that the paper describes. The FOMC had an end-2018 median fed funds rate of 2.4% at the June meeting and my guess is that it is lower now. Markets don’t price in even 100bps in fed funds till the end of 2019 (taking Eurodollar rates and subtracting 40bs or so.) That said, a 5% shock to the unemployment rate is pretty extreme, if the Fed is not stepping on the brakes hard or world not falling apart for other reasons.”

How much room does the Fed have? Very little:

In the simulation is looks as if it takes about 160-180bps of fed funds reductions (peak response) to offset an 1% UR shock, so right now they could offset maybe an 0.20% shock to the UR with the rates room that they have.

But most troubling of all, is just how critical starting conditions are for further easing; considering monetary conditions right now are unprecedented, it means the Fed has its work cut out for it:

The problem the paper outs in relief is that the effectiveness of rate cuts/QE/rate guidance goes up with the starting point of rates – so the combined policy tools are much more effective if the fed funds rate is 3% than if it is 2% and certainly a lot more than if it is 40bps. There is a good reason the paper does not examine the options for fighting recessions under current conditions. The drop in fed funds also takes 10 year yields down, and roughly 30-40bps in 10s for every 100 bps in fed funds,  so if you are starting with fed funds at 40bps and 10yr yields at 160bps, rates policy/QE/forward guidance are not going to do much. Short rates, long rates and rate expectations have nowhere to go, unless you bring negative rates into the discussion, which does not occur.

And, as noted above, not less than $4 trillion in QE would be enough to “get long rates down far or fast enough to offset the shock.”

What are the implications for the Fed, and thus to the market, as a result of the paper? It depends on whetyher one is a hawk or a dove:

To the doves fast growth and higher inflation inoculates the Fed and the economy from policy ineffectiveness at the zero bound so it is a very dovish outcome. Insofar as having 2.5% or 3% inflation makes policy more effective in a downturn there is a case for loosening the target, or not admitting to loosen but reacting to an overshoot anyway.

Hawks may argue that there is a case for raising rates faster, not slower, but the argument has to be made carefully. Assume that the next recession comes in a year from a source not related to Fed policy – the EU falling apart or a major geopolitical event. If fed funds is at 100bps, for example, they may have a meeting or two to stimulate by taking policy rates down while laying the ground for the much bigger stimulus from fiscal or helicopter money that would  be needed. If fed funds are very low, investors, households and firms may lose confidence when they recognize that policy has nowhere to go. But this logic depends crucially on this confidence effect which may or may not exist. Hawks can at any point argue that the risks of the zero bound are overstated or that easy Fed policy makes the next recession more likely by making a financial crisis more likely at some point, but that is outside the scope of the paper.

Incidentally, all of the above is a long-winded way of saying the Fed hiked rates, only to be forced it will have to not only cut them, as Japan did 7 months after its ill-fated August 2000 rate hike as we cautioned last August… 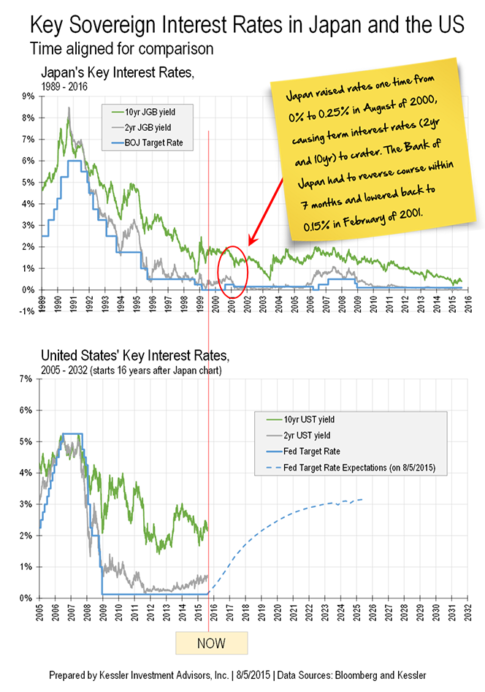 … but that when the US economy slides into the next sharp recession, no less than $4 trillion in QE will be needed to stabilize the economy, bringing the Fed’s total holdings of government bonds to well over 30%. And with that in mind, we look forward to what “upside rate hike surprises” Yellen has in store for the market this coming Friday, especially if the politically-tasked Bureau of Labor Services continues to surprise to the upside with fresh record numbers of minimum-wage restaurant workers and bartenders.